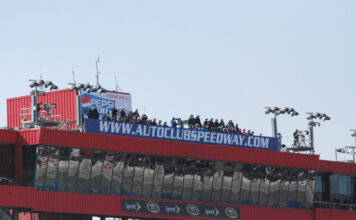 A few years ago former NASCAR Sprint Cup champion Bobby Labonte was asked about his thoughts about increasing the excitement level during Cup races. Without a seconds hesitation Labonte replied “shorten the races.” As I read his thoughts on this matter I quickly realized that Labonte was right with this assessment. Chopping 100 miles off of many of NASCAR’s Sprint Cup races is actually a very good idea.

This point was proven this past October when the Auto Club Speedway decided to roll the experimental dice and delete 100 miles from their annual signature event: the Auto Club 500. The result was simply astounding and the event concluded with Tony Stewart taking the checkers over Clint Bowyer by a mere margin of 0.466 seconds. It was one of the closest finishes in the track’s history.

Now bear in mind that this massive two mile, D shaped oval, located in Fontana-California has endured a great deal of motorsports themed criticism over the years. The press often called the racing there “tedious” and then often picked apart the track, its races and even its special promotional efforts.

I have to concede that there were times over the years that the top ten leaders were a little strung out during these races especially during the middle portions of the events. That’s when I started casting my eyes towards the middle of the pack around positions 20 through 30. This racing often featured teams with limited sponsorship programs. These teams were racing hard because every position gained meant a slight financial bump in the pay check for their owners. These teams were often racing to maintain their status in NASCAR’s top 35 in owner’s points to insure a guaranteed starting berth for next Sunday’s event. I recalled often flinching as I watched these cars race four, sometimes even five, wide heading towards the turns and wondering if they were going to make it without crashing. I never again allowed anyone to tell me there wasn’t good racing at this track.

I also recall reading critical reports regarding this speedway that were often unfair and sometimes totally ridiculous. I vividly recall a racing column; published back in 2007 that spent two paragraphs ripping the speedway apart because they had ran out of asparagus tips in the media lounge. The speedway invited this writer to their event, gave him unfettered access free of charge, fed him, spent the better part of three days practically kissing his backside and then he rips them up over asparagus? As ridiculous as that sounds, criticisms of this track at this level were more often the norm as the exception.

Isn’t it amazing how all of that changed during a late Sunday afternoon last October? By the conclusion of last year’s Auto Club 400 the very same critics, who were looking for something negative all weekend long, were now saying it was the best Fontana race since the track’s inaugural event back in 1997. Everyone was raving about the intensity of the Auto Club 400. Driver Clint Bowyer probably stated it best when he said “they say you’re only as good as your last race. Well, for this place, that was one hell of a race.” Isn’t it amazing that all of this new found respectability stemmed from the simple decision of shortening the event 100 miles?

With that decision, came a new level of intensity in the Auto Club race. The drivers knew they would have to mount a charge to the front earlier than usual. Crew chiefs were acutely aware that they now had one less pit stop to massage the handling of their cars. Pit crews were aware that one less stop meant every second spent on pit road was now more important than ever.

Fans can now expect more of the same in 2011. Knowing a great situation when she sees one, speedway President Gillian Zucker recently announced that this year’s Auto Club sponsored race will also be 400 miles. NASCAR’s only stop in southern California is set for the weekend of March 27th and there’s already talk regarding the anticipated excitement level of this event.

The Auto Club Speedway staff has a long reputation for their willingness to think and work outside of the box. The result has often been some rather unusual, but fun, themed ticket promotions. They have already launched some of those promotions for the race in March and many of them are extremely affordable and fan friendly. They can all be found at www.autoclubspeedway.com.

Whether you’re sitting in the speedway grandstands March 27th or at home watching the race on Fox Sports, don’t be too surprised if you get treated to an intensely exciting Auto Club 400.

Then ask yourselves why the other tracks on the NASCAR Sprint Cup schedule aren’t shortening their race distance as well.