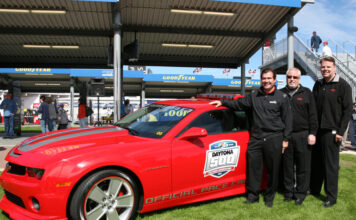 DAYTONA BEACH, Fla. – Daytona International Speedway and Chevrolet officials announced today that the Chevrolet Camaro SS will serve as the official pace car for the 53rd running of the Daytona 500 – the second time in the past three years that the iconic automobile has paced the field for the “The Great American Race.” [/media-credit]In addition, behind the wheel of the Chevrolet Camaro as the Honorary Pace Car driver will be Country Music Association Entertainer of the Year Brad Paisley, who is also performing the Daytona 500 Pre-Race show.

The Chevrolet Camaro has previously paced the field for the Daytona 500 – NASCAR’s signature event – three times beginning back in 1968 and 1969 and most recently in 2009.

“Chevrolet has been a great partner and supporter of Daytona International Speedway and the Daytona 500 for close to 40 years,” Daytona International Speedway President Joie Chitwood III said. “The Chevrolet Camaro is one of the most recognizable cars in the world and is a perfect fit to lead the stars of the NASCAR Sprint Cup Series to the green flag in the Daytona 500.”

“Chevrolet is proud to serve as the “Official Pace Car” of the 53rd running of the Daytona 500” said Jeff Chew, Chevy Racing Marketing Manager. “The 400 hp 2011 Camaro SS was selected to pace the field to the green flag to showcase Camaro’s performance and styling on one of the most famous race tracks in the world.”

In the Daytona 500 Pre-Race Show, Paisley, who has 18 No. 1 hits, three Grammy awards, 14 CMA Awards and 13 Academy of Country Music (ACM) Awards, will perform three songs prior to the start of the Daytona 500.

Paisley’s innovative and entertaining H20 World Tour played to over 879,000 fans in 2010 and placed #1 country tour for attendance by Pollstar.  Paisley’s next album, This Is Country Music will be in-stores this spring.

Tickets for Speedweeks 2011 events and the 53rd annual Daytona 500 are available online at www.daytonainternationalspeedway.com or by calling 1-800-PITSHOP.