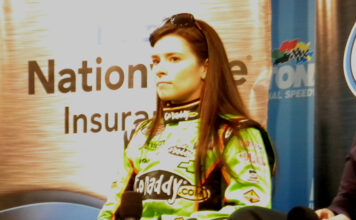 Move over ‘You and Me Both Junior’ as there is a new girl on the team.  Nationwide Insurance announced today that Danica Patrick, driver of the No. 7 GoDaddy.com Chevrolet Impala for JR Motorsports, will join her boss and the Earnhardt family as part of the Nationwide promotion team. [/media-credit]Patrick, who is also a Nationwide customer as are Dale Jr. and his sister Kelley Earnhardt, met with the media at Daytona International Speedway to announce the new partnership.

“We are thrilled to be here to talk today about our relationship with JR Motorsports,” Jennifer Hanley, Senior Vice President of Marketing for Nationwide, said. “We have been in a relationship from a motor sports perspective for four years.”

“One of the nice things that happened when we came together is that we learned that the Earnhardt family has been long-time customers of Nationwide,” Hanley continued.  “In fact, the relationship spanned over thirty years.  So, it was a great story for us to tell together.”

“With the addition of Danica now to JR Motorsports, it gives us a fresh, new opportunity to talk about new products and services that our company has,” Hanley said. “One of those new products is the vanishing deductible.  We were able to bring Danica together with Dale to bring some humor to a spot that features both racers.”

The commercial, shot on location at Charlotte Motor Speedway, shows Jr. and Danica on pit road.  Danica encourages Junior to “Go Long” and tells him to “Keep Going” until he vanishes from the picture, all the while explaining the benefits of Nationwide’s new Vanishing Deductible plan.

As Danica rambles on, the commercial turns to Dale Junior driving away from the track, sharing the fact that something else has been vanishing besides his presence on pit road.  In fact, Junior shares that Danica’s ride home as just vanished, as he smirks in a self-satisfied way and drives off pit road.

The commercial was previewed in the media center and drew an enormous laugh, particularly after Junior’s wicked grin and ditching of his protege.

“Thank you for laughing because that really was the reaction we wanted,” Patrick said.  “It was really fun to shoot.”

“Dale and I had worked together on a music video but it’s been a while,” Patrick said.  She and Junior had shot a Jay-Z music video “Show Me What You Got” in Monaco in 2006.

“So, it was nice to do that and nice to do that with my boss as well,” Patrick said.  “I really like the commercial and I felt like I was getting it as we were doing it.  I think that in any successful campaign the product is good too.”

“I’m honored to be with Nationwide now,” Patrick continued.  “But being with Dale is icing on the cake.”

For his part, Junior also enjoyed his time shooting the commercial with Danica.

“I expect the ‘Go Long’ TV spot will be one of the most popular,” Junior said.  “This was my first commercial with Danica Patrick so everyone will have to determine who played their role the best.”

While both of the ‘stars’ were praising each other, they both acknowledged that shooting the commercial was quite a bit of work.   They still worked through it in record time, completing their task in about four hours.

“Well, we did many shots,” Patrick said.  “Dale did his share of running.  He got himself a work out.”

Patrick also joked that the filming had to be completed expeditiously on her account.

“It’s really about my hair,” Patrick said.  “It’s about the hair blowing in my face, so it was about getting it out of my mouth.”

“In pre-market testing, the 2011 ad featuring Dale Earnhardt, Jr. and Danica Patrick has shown double digit increase over the 2010 ads.” Hanley said. “We think NASCAR fans will enjoy the banter between the two superstars.”

Kelley Earnhardt also echoed the commitment of JR Motorsports, as well as the Earnhardt family, to Nationwide Insurance.

“Pretty much what it means to our family is an authentic long-standing relationship,” Earnhardt said.  “To have this partnership has been a win win for JR Motorsports and Nationwide.  We’ve done a lot of fun things together and it’s been fun to add Danica to that mix.”

Dale Junior added his appreciation to Nationwide Insurance, not just from a business perspective as sponsor of the Nationwide Series, but also on a personal level.

“One of the best things that I can do is align myself with companies and brands that I actively use,” Junior said.  “This is a partnership that is as genuine as they come.”

“Nationwide was recognized by NASCAR this past year for their marketing achievements and TV campaigns,” Junior continued.  “It’s an honor to be a part of it.”

The new Nationwide commercial will debut nationally on ESPN during the Daytona Nationwide race.  It will also be run for audiences outside of motor sports, which is intended to reach an even broader audience.