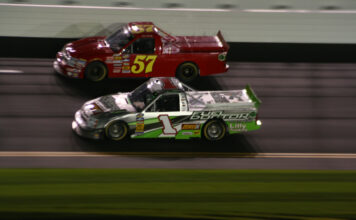 When Jeffrey Earnhardt walked to the starting grid for the NextEra Energy Resources 250 at Daytona International Speedway on Friday night, the young driver knew that the Earnhardt name was on the tip of everyone’s tongue.

The media coverage on his grandfather, Dale Earnhardt, passing 10 years earlier at Daytona was widely covered across the globe and many eyes were focused on the 4th generation driver bearing the family name.

Jeffrey qualified his #1 Fuel Doctor Platinum Chevy in the 23rd position and knew his truck was going to be great in the draft once the green flag dropped.

Earnhardt moved quickly into the top twenty by lap ten and tested drafting partners throughout the day, moving from 11th to 22nd by lap 80.

The Fuel Doctor Chevy Team led by veteran crew chief Joe Lax already had a plan in place prior to the green flag dropping. “Our goal here in Daytona is for Jeffrey to log laps and finish the race” said Lax. “Jeffrey has spent countless hours this offseason working with a driver coach and learning to develop patience and that showed with his stellar performance on-track”.

After dodging several incidents ahead of him, Earnhardt and his Fuel Doctor team were in good company hanging back in the field with their drafting partner for the night the #18 truck of Kyle Busch and were ready to make their way to the front with their Chevy truck when chaos broke out and Jeffrey received some damage with just under ten laps to go in the event.

Jeffrey’s truck had severe damage to the front end, however because of the red-flag called, and the positioning of the truck, it was difficult for the spotter and his driver coach that were up on the spotter stand to see the damage. Lax made a veteran call, when he decided to stay out and take a chance at having a tire go down, since he know there would be no chance of a win if he were to bring the #1 Fuel Doctor Chevy to pit road with only a few laps remaining.

When the smoke cleared from nearly a dozen wrecked trucks, Earnhardt found himself in the seventh position with a green-white-checkered flag finish to decide it all.

Earnhardt strategically got the nose of this Fuel Doctor Chevy under the #10 of Jennifer Jo Cobb for the 3rd position as the white flag flew, and the Rookie of the Year Contender made a veteran decision in not causing an incident and settled in behind Cobb.

Coming to the checkered flag, Earnhardt took the inside line behind the leaders as an outside line picked up momentum.  The photo finish provided Earnhardt his career high in the 7th position and the start to a solid Rookie of the Year campaign.

“I can’t thank everyone enough that has supported me on this Rick Ware Racing Fuel Doctor Chevy team” said Earnhardt. I have a great driver coach (Jerry Nadeau) and without the support of everyone around me I could not have done this. It was great having Kyle (Busch) help on the track and I am happy about our finish. I was told to hang back and just log laps and learn my truck, so that is what I did. I had a great spotter and my crew chief Joe did a great job. I would like to thank Mark Soffa from Fuel Doctor, Fast Wax and Rick Ware for supporting me. I think it is really cool that Michael Waltrip won; the only thing better would have been for my Rick Ware Racing Team to be celebrating in victory lane.

Earnhardt currently sits 3rd in the Drivers Championship standings and second in the Rookie of the Year standings heading to the Phoenix International Raceway for the running of the Lucas Oil 150 on Friday, February 25th.

Official Release
Previous articleSpeed Weeks: A War of Attrition
Next articleKory Rabenold Determined To Put Career Back On Track In ‘11