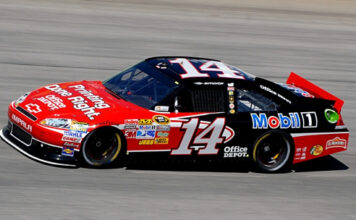 Earlier in the week, the man known to many as Smoke upset a lot of people. His fans and many of his competitors took offense to some of his comments regarding the chase chances of the golden 12. Smoke listed himself as one of the 4 chase contenders who would not compete for the championship in the final 10 races. But at the end of a rain postponed race in Chicago, Smoke looked like a master of mind games standing in victory lane and holding the trophy high. [/media-credit]Earlier this week, Tony Stewart created quite the stir when he was asked who his favorites for the chase were. Stewart in his typical straight forward to the point style said that the 14, 88, 2, 11 and the 17 would not contend for the championship even though they were in the chase. Interestingly enough for those that don’t know, Tony Stewart’s car number is 14.

For those that have followed Tony Stewart’s career, it was not a big surprise to hear that come out of his mouth. What was a surprise was that people believed he actually felt that way. Smoke has been a racer his whole life. Every racer knows that on any given day anything can happen. No racer, let alone a multiple series, multiple type of car, and multiple year champion, ever believes that they can’t contend for and win the championship.

It is an ego of sorts, a self confidence factor that exists in everyone who races for any length of time. It is the way that drivers deal with the stress, the pressure, the knowledge that wrecks hurt. They always believe they can win. Without that confidence they are mid pack and also rans. It simply is not possible to be a champion or a racer if you don’t believe you can win against the odds.

Tony Stewart knows this. He knew it when he made the statement. But it’s chase time. And the mind games began weeks ago, from every competitor and every team. Tony Stewart is a master of mind games. His game has changed over the years. It went from physical aggression as a form of intimidation to leaning on that reputation to now he plants the seed of doubt in your mind. Does he really think that? Surely he doesn’t really believe he is not going to be a factor.

Of course he didn’t believe that. But he made everyone else believe it. He got in your head. He put that seed of doubt there. If he believes it I don’t have to worry about him. Normally you would be right. But this is Smoke. This is balls to the wall, hard core take you to task Tony Stewart. And on Monday, he showed you what he could do while you were discussing what he said. He won the opening race of the chase.

After the points reset, which was the equivalent of staying on the track when the rest of the field pitted and getting a caution 2 laps after the restart; he gained track position or in this case points position. He climbed from 10th to 3rd. He is only 7 points out of the lead. And he has momentum. How’s that for mind games?

Tony says he is thrilled to have won the race but he is still not convinced that it’s solid footing. “I’m not sure one weekend can do that,” Stewart said. “But I feel better about it, obviously. We’ve had three good weekends in a row. [Monday] doesn’t change my mind — but the last three weeks definitely make me feel better about it.”

“We’ve still got nine hard weeks to go. And we have some tracks ahead that have been a struggle for us this year. So we’ve got a long way to go, but this gets us off to the right start.”

Smoke wasn’t the only one playing mind games the last few weeks. There was a little bit of that going on from the Hendrick Motorsports 88 team of Dale Earnhardt Jr. as well. For the last several weeks Dale Jr has been saying “we are playing it very conservative.” His crew chief, Steve Letarte, said we are points racing but once we get in the chase solid you will see a much more aggressive 88 team.

After the last several years of struggling, many fans, media and competitors alike said Sure we will. Many were betting he wouldn’t make the chase at the last minute.

But in Richmond, after a lap 8 wreck, Dale Earnhardt Jr. reminded people he was there and that he was a force to be contended with. Earnhardt took a car whose hood was taped down and whose radiator had one holding bracket intact and finished 16th on the lead lap. Not an easy task when you realize that he had been one lap down 4 times and managed to maintain the position for the Lucky Dog Pass all four times.

Earnhardt only had to finish 20th or better to secure a place in the chase. It didn’t matter what anyone else did or where they finished. He had to be 20th or better. He did what he had to do. And he did it with some fire we hadn’t seen from him in quite a while. He retaliated a couple times for some slights on the track that he didn’t appreciate. One radio conversation between another driver and crew chief was “Was that Dale Jr? He actually spun me out?”

Chicago brought to fruit the promise made by driver 88 and his crew chief. Their qualifying effort, though poor by most standards was good for them. Their race had them struggling at times with a car that was too tight but pit stops that were some of the best of the field. He ran in the middle of the pack staying on the lead lap and adjusting the car all day until the final run. Whatever the change was that was made on that final stop brought the car to life.

Dale Jr drove from 17th to 6th on the final run. Although three competitors in front of him would run out of fuel and boost his finish to a 3rd place finish, Earnhardt Jr proved he was a serious contender.

While many competitors dropped to the apron out of fuel the 88 was still under power when it crossed the finish line. “We were never worried about our fuel mileage. Steve said we’re about three tenths of a lap short before we ever took the green flag for that last run. We were going a little faster. We were worrying maybe this was probably the worst fuel mileage we was going to have all day long. So we started backing off and saving gas with about 20 to go. And so it’s just enough. It started running out at four but ran to the finish line but it wouldn’t have made it another lap.” Earnhardt Jr. said.

The 3rd place finish was his best since his 2nd place finish at Kansas earlier in the year and it vaulted him to 5th in the points just 14 points out of first.

The biggest disappointments in Monday’s race were surprising. Jeff Gordon went a lap down midway in the race with a bad right front tire that was worn down to the cords on the inside causing him to have to stop for tires. Gordon could never quite make it back to the lucky dog position and then ran out of gas on the final lap to go a second lap down. The misfortune hit the 24 team hard dropping them to 11th in the points 25 points out.

The driver of the 24 had all the momentum on his side coming in to Chicago. He was in the best form that the sport had seen him in since his last championship year in 2001. “We were just off,” Gordon said. “We didn’t qualify good (23rd). That got us behind right there. It was just one of those days. We had a right front (tire) tear apart. We actually got the car halfway decent there at the end. Then it came down to saving fuel, and we obviously didn’t save enough fuel.”

The other surprise was Denny Hamlin in the Joe Gibbs Racing Fed Ex Toyota. Hamlin seemed to be looking at huge mountain from the beginning of the weekend. He qualified deep in the field in 27th spot. He was up to 20th and making his way forward when on lap 78 he radioed Mike Ford that he had a vibration and he needed pit. The unscheduled stop for 4 tires put Hamlin a lap down and he could never make his way into the lucky dog position.

Late race contact with Greg Biffle would cut down a left front tire which would come apart doing damage to the left front fender. At that point Hamlin’s day was over. He finished 31st 4 laps down to the field.

But the biggest damage wasn’t the finish or the car, Hamlin would come out of Chicago in 12th spot almost a full race in points behind leader Kevin Harvick. Denny Hamlin did not address the media following the race. But crew chief Mike Ford said, “In a word, it was a [crappy] day, everybody didn’t execute. End of story. “We basically cut our tire down and tore the car up a little bit,” Ford said. “It was junk from that point.”

Where the mind games left off pre chase. The performances of Chicago will now take over. Drivers ruled out by themselves, fans or media have new life from good finishes. It will give them confidence and momentum as we move on to New Hampshire and the magic mile.

The top 12 drivers in our sport will begin the process all over again. The pressure and the stress will continue to mount every week. They will confidently walk to their car and make great effort to not show the butterflies that they feel. But whether first or last, the one thing they all have in common, whether they be a five time champion or first time Chaser is they all believe without a shadow of a doubt that they can win. No matter what they say to the media.

Congratulations to Austin Dillion and his RCR Bass Pro Shops Chevrolet team on their victory on Friday in Chicago. The youth movement is alive and well in the Camping World Truck Series.

Congratulations to Brad Keselowski and his Discount Tire Dodge team on their victory in Saturday’s Chicago victory.

Congratulations to Tony Stewart and his Office Depot Chevrolet team on their victory in the opening race of the Chase.

Kudos to J.J. Yeley on doing the right thing. Even if it was against the rules. Your willingness to help someone else make it back home or in this case the start finish line is refreshing. It reminds me greatly of the motto of one of this countries largest group of heroes, “No man is left behind.”