The Hall of Fame – My Take 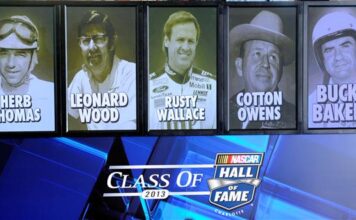 [/media-credit]The panel of over 50 people named the 2013 class to be inducted into the NASCAR Hall of Fame. Once again there are only five inductees, something I’ve railed about before. The Hall of Fame, in my opinion needs to have more people inducted each year. I also feel one of the main reasons that attendance has not been as stellar as many wanted is that there are so few inductees. That said, that is the way it is and I guess we have to live with it.

This year’s class was surprising and yet satisfying. It included Herb Thomas, the driver who drove Hudson Hornets to a couple of championships and many wins in the Sprint Cup series in the late 40’s and 50’s. Next was Cotton Owens, the legendary driver and car owner. I remember him from my youth as the owner of the No. 6 Dodge that Buddy Baker and Pete Hamilton drove to victories in races in the 70’s. Leonard Wood joined his brother Glen as an inductee. Glen and Leonard made up the famous Wood Brothers team that still exists today. Buck Baker, whose real name was Elzie Wylie Baker, was also an inductee. Baker not only won two championships (in 1957 and 1957), but he was the father of the previously mentioned Buddy Baker (Elzie WylieBaker, Jr.). Finally, there was Rusty Wallace. The 1986 Sprint Cup Champion was the only driver from the modern era, but his statistics stand up with the legends.

The only disappointment was that there were only five allowed. My understanding is that there was a tie between Baker and Fireball Roberts. What a shame. Both deserve to be in the Hall, but Baker’s two championships turned the tide. Why are only five chosen each year. That’s a good question. Would it have made any difference if six were chosen this year? Apparently so, and that is a shame. I also have favored Fred Lorenzen, but if championships are the main factor for admittance to the Hall of Fame, then Fearless Freddy will be on the outside looking in forever. Lorenzen, along with David Pearson, who has a championship, has a tremendous winning percentage. If we are to measure drivers by the true measure of a driver, winning races, should not Lorenzen and Turner be considered? At least not this year.

On the positive side, three notables will be inducted into the Hall that are still with us, which I think is very important. Cotton Owens, all of 88 years old, Leonard Wood, who still works with the No. 21 team, and of course, Rusty Wallace are still with us. Gone, but not forgotten are Herb Thomas and Buck Baker.

The panel did do one thing that has my total and enthusiastic approval. In creating media inductees to the Hall. This year, one person from television and one from radio were chosen, Ken Squier, who I grew up listening to on radio and then television was inducted. No voice was ever more aligned with NASCAR than Squier. He called so many famous defining moments of the sport including the famous “fight” between Bobby and Donnie Allison and Cale Yarborough., which many say started the whole NASCAR boom.

Barney Hall has been part of my Sundays for as long as I remember. The southern gentleman who has called races on the Motor Racing Network for as long as I can remember, is simply the smoothest voice in radio. Raceday without Mr. Hall is not raceday, and yet I wonder where is Chris Economaki? Where are Tom Higgins and David Poole?

Regardless, the NASCAR Hall of Fame has some deserving inductees, I would hope in the future that NASCAR follows the lead of the stick and ball sports. There should be a veteran’s committee who can propose older stars, who may not be remembered by today’s fans. The media wing of the Hall should have another committee to induct those who are deserving, but more than all of that is that the Hall should make sure that the former stars of the sport (just for an example, Bobby Isaac, Fred Lorenzen, and others), who didn’t win a championship get recognized. I think they will do this, but a little nudging doesn’t hurt.

Ron Fleshmanhttp://www.ris-news.com
Ron Fleshman has followed NASCAR racing since attending his first race at Martinsville Speedway in 1964. He joined the Motor Sports Forum on the CompuServe network in the 1980s and became a reporter for Racing Information Systems in 1994. In 2002, he was named NASCAR Editor for RIS when it appeared on the World Wide Web as www.motorsportsforum.com. He can now be found at www.ris-news.com. Ron is a member of the American Auto Racing Writers and Broadcasters Association. You can find Ron following and reporting on the top three NASCAR divisions each week. As a lifer in his support of racing, he attends and reports on nearly 30 events a year and as a member of the motor sports media, his passion has been racing for 47 years. He lives with his family in rural West Virginia and works in the insurance industry when not on the road to another track.
Previous articleCoca Cola 600 Changes But Remains Test Of Endurance
Next articleEnlistT Weed Control System Continues as Presenting Sponsor for U.S. CellularR 250