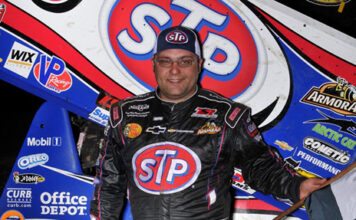 The World of Outlaws made their first visit to Cornwall Motor Speedway this evening. The high banked 4/10 mile track would hold many surprises for the drivers of the Greatest Show on Dirt; some would be pleasant and some would be not so pleasant. But at the end of the night all would leave with a new respect not only for the track but for the winner as well.

On Saturday Night during the A Main, teammates Donny Schatz and Steve Kinser got into a vicious tangle that would send Donny head on into the end of an inside retaining wall. The impact would send his winged sprint car into a series of wild and vicious flips leaving him in the infield. Schatz who climbed from the car under his own power took a few steps and then went down to his knees on the ground a short distance from the car. Although Schatz would be released by paramedics the impact and the flips were incredibly hard and bone jarring. Late Saturday night Schatz’s True Speed Communications representative would give the following update on his condition, “Donny is a little sore. But he is racing tonight.” During the broadcast by the World of Outlaws it would be reported that Schatz was competing with a shoulder injury. His performance through out the night would not give any indication that 4 time Outlaws Champion Donny Schatz was anything but on his A game.

Qualifying went quickly with the 22 cars turning 10 and 11 second laps. With this being a debut date the quick time would be the new track record and that time would be set by Lucas Wolfe with a lap of 10.246. The top 13 cars would all turn laps within the 10 second range with only .633 seconds separating first from 13th.

The Qualifying would prove eventful for the two female drivers in the field Jessica Zemken and April Wilson. Zemken would experience engine difficulties and have to change engines over to a 360 cu in rather than the 410 cu in engine she began the night with. April Wilson would scratch for the evening before even taking a lap on the track.

The three heat races were exciting and brought surprises of their own. With everyone transferring to the A Main the need to finish as far up as possible became critical to try to capture one of the 4 remaining dash positions to get in that precious top 10 starting spots of the A.

The first heat race was won by Joey Saldana but not without a hard fight from Australian Sprint Car Champion James McFadden. It would be a hard fought race that Saldana would win with no breathing room. McFadden didn’t have any either as he had 20 time World of Outlaws Champion Steve Kinser on his heels. The first big surprise came on lap 6 of the heat. Cody Darrah and McFadden would get together when McFadden would attempt a poorly timed slide job sending Darrah flipping wildly and coming to rest on the top of the back stretch retaining wall. Darrah would walk away but the car would not be so lucky. With massive front and rear damage the team went to the tree house for the back up. Pulling the back up would mean surrendering Darrah’s Dash spot and relegate him to the last starting spot in the A main. McFadden would somehow never come to a stop and continue on putting him back in the second spot that he was challenging Darrah for at the time of the wreck. When the checkers flew, it would be Joey Saldana holding off McFadden and Kinser but Saldana would hurt the engine on the final restart and have to change engines going into the dash his second such surprise of the day.

The second heat would start 4 time Champion Donny Schatz on the front row with Bill Rose. Schatz would pull to the lead and never look back. He would be challenged late in the heat by points leader Craig Dollansky but would hang on for the win. Finishing in third was Sammy Swindell.

The third heat would be the hardest fought of the heat battles. With Kraig Kinser holding off a hard charging Kerry Madsen and Chad Kemenah. Jessica Zemken would start the heat but would pull off at half way with more engine difficulties.

The Dash inversion draw was an 8. This started Schatz and Kraig Kinser on the front row with Kinser taking the pole. Schatz was on a mission and took the lead going into 3 on lap 2. Kinser would have his hands full with a hard charging Kerry Madsen for the entire 8 laps. Joey Saldana whose engine was changed in time to start the dash would pull off the track before half way with a broken rear end. Schatz would win the Dash to start on the pole and set up one of the hardest fought battles of the year with Kraig Kinser.

The A Main was a 40 lap hold your breath sit on the edge of your seat and yell for your favorite kind of race. Donny Schatz took the early lead but Kraig Kinser wasn’t going quietly. He charged at Schatz from the high side and Schatz held him off. He went to the bottom and slid up on Schatz but Schatz turned back under him. He got side by side. He tried everything short of contact to get around Donny Schatz to no avail. Schatz held on in traffic, on clear race track on the straights in the corners. With 8 laps to go Kerry Madsen would spin in 4 and Sammy Swindell would spin in 2 bringing out the only yellow flag of the evening. But not before Kraig Kinser would do a perfect 360 and drop to 5th. On the restart it would be Schatz and Dollansky with a hungry Steve Kinser in third. The green would be a drag race to 1 with Schatz going to the cushion and Dollansky to the inside Kinser would slide high and challenge Dollansky for the second spot and Dollansky would hold him off. All the while Schatz was getting away. Finally coming out of the 4th turn Steve Kinser pulled a perfect slider onto the straight to pass Dollansky and clear him at the line. The game had just changed. Schatz and his teammate would settle this feature. Who would it be, The King or his 4 time champion teammate. It didn’t take long to find out with 2 laps to go Schatz put a lapped car between he and Kinser and pulled out to a second lead. When the checkers fell Kinser would be just 3 car lengths off his bumper with Dollansky right on his and Sammy Swindell looking to Dollansky’s inside. . After the worst possible night on Saturday, Donny Schatz came back to win the debut appearance at Cornwall with the Outlaws. Shoulder pain is no laughing matter for a race car driver no matter what kind of car you drive but for a sprint car driver it’s twice as difficult. But Donny Schatz was there to win. He had the wing pulled all the way back and he was ready to fly. And fly he did. Schatz won every race he drove tonight and won it in convincing style. Proof that heroes are those among us that do what the rest of us don’t believe can be done no matter how bad it hurts or what the risks are.

KSE Hardcharger of the Race was Cody Darrah coming from 21st to 10th.

World of Outlaw Points standings as of Cornwall.

SM Staff
Previous article
Earnhardt Jr. takes point lead but will ‘have to wait until next year’ to win Indianapolis
Next article
16TH AT INDIANAPOLIS FOR JASON BOWLES AND THE AMERICAN MAJORITY NO. 81 TOYOTA TEAM