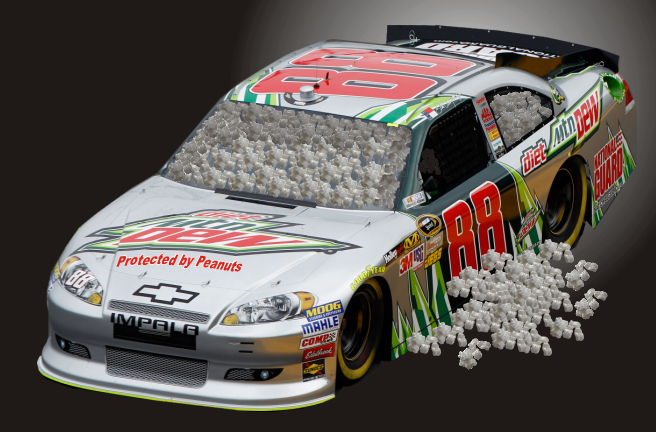 LARRYLAND PRESS: After missing two races due to a concussion received at Talladega, Dale Earnhardt Jr. was apparently cleared to compete in this weekend’s Martinsville race, however, apparently Hendrick Motorsports team representatives did not see the “small print to follow, etc, etc” subtitle below the official medical clearance allowing Dale to return to competition this Sunday.

The ‘fine print’ reportedly included a condition to be met, in that Dale would have to drive the #88 during practice, qualifying, and the race as well with the interior of the Hendrick Chevrolet completely filled with Styrofoam packing peanuts, so that he would be entirely encapsulated to the ceiling in shipping materials, in an effort to reduce potential injuries should Dale have another accident.

When Dale Jr. and other team members saw this clause, after it was blown up to a larger size for easier reading with an electron microscope, he reportedly just stood there with something of a blank look on his face, and said, “………………..?……………..”.

The obvious question is how is Dale Jr. supposed to actually see out of the car (especially during race conditions), when he will be completely buried in packing peanuts. However, the clause also makes note of this small problem, and allows Dale the use of a second, third, fourth, and fifth spotter for this event, which instead of simply letting him know when there is someone too close, or alerting him to potential dangers on the track, all five spotters (in addition to his crew chief) will be speaking to him at the exact same time, letting him know when and where to steer, when to hit the brakes, when to hit the gas, when to swerve, when to slow down for cautions, keeping him apprised of vehicle conditions, alerting Dale to any changes and/or new comments on his Facebook page, when and where to pit, acknowledging changes in track or weather conditions, not to mention letting him know exactly where he is on the track at every moment.

Essentially, according to NASCAR mandates, Dale will be guided around the track at race speeds, entirely through voice commands delivered seamlessly by his team of spotters, who are made up of his existing spotter, and joined by two extremely-militant, hard-left-politically feminists, along with two hard-core male National Rifle Association lifetime members. Early reports suggest that the four additional spotters might not be meshing together all that well, but should have most violent disagreements ironed out, and lacerations stitched up by race day.

And in an attempt to court potential corporate sponsor “Rosetta Stone”, Dale will also be taking German language lessons during the race, in addition to doing some in-car, voice-over work for an audio version of his new autobiography, “My Lif’e’s Struggle With My Wrangler Jeans.”

Other drivers are reportedly not too thrilled about this development, and have secretly demanded NASCAR that Dale be covertly moved to an abandoned church parking lot during the opening laps of the race, and then allowed to ‘compete’ for 500 miles, driving blindly in circles until the ‘race’ is over, and Dale quietly moved back on track during the final five laps of the race, simply because that’s when most TV-viewing race fans will be turning back in to the race, anyway.

LarryLand will post any updates to this story as they happen, as this is breaking news.

Leave a Reply to The Jerk Who Wrote This. Cancel reply