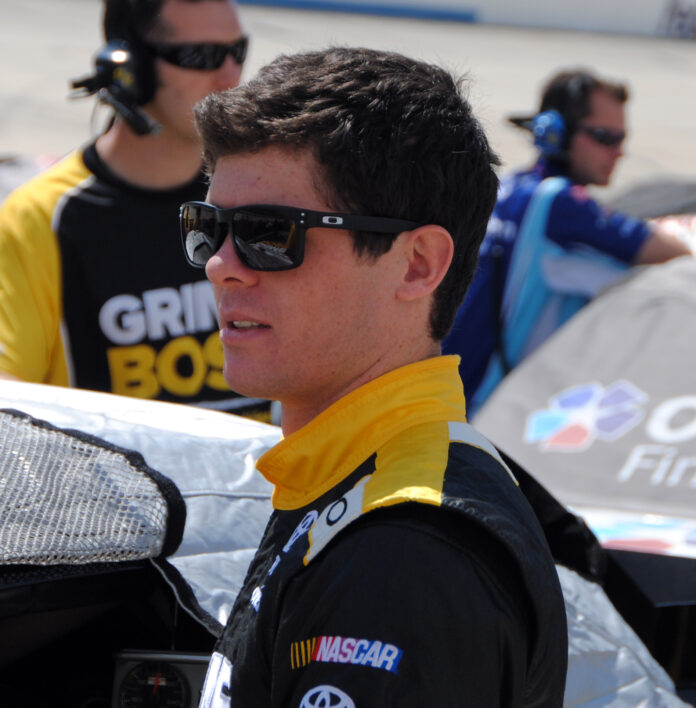 While Ryan Truex was thrilled about landing a full-time Cup ride in the No. 83 Toyota with BK Racing, he was also just plain taken by surprise by the opportunity that developed a month before the start of the 2014 season.

“They had kind of been looking at bringing in younger drivers for a little while now,” Truex said. “Ron Devine (team owner) has always talked to me at the race track.”

“They needed a driver for the off season to go test with them and luckily I was available,” Truex continued. “And it just snowballed from there to where we are now.”

“I’m pinching myself a little bit,” Truex sad. “I don’t think it has fully set in yet.”

“It has definitely been a surprise.”

Prior to receiving the offer from BK Racing, Truex has been working with team Petty to trying to find funding to run some Nationwide races on a part-time basis.

“So, this deal just came out of left field,” Truex said. “That’s usually what happens though and was a nice surprise.”

“Everything worked, the stars all aligned and now we’ve got thirty days to get ready and the season starts.”

Truex is stepping into the already formed 93 team, complete with crew chief Dale Ferguson, who we just recently met at the Daytona test.

“So, I’m just basically stepping in,” Truex said. “Those guys all know each other and they know the system and how everything works.”

“They’re just kind of plugging me in.”

“I just met Dale a few weeks ago before the Daytona test,” Truex continued. “We seemed to get along pretty well and everybody on the team gets along really well.”

“We gelled well and going forward I think it will be a good combination,” Truex said. “Dale knows the ins and outs of the team and the cars so it should be a pretty easy transition.”

Truex is not only looking forward to having a full-time Cup ride but also to working with his teammate Alex Bowman, as well as competing in one of the most competitive rookie classes in recent history.

“I think it will be good because Alex and I know each other a little bit and we’ve raced each other in Nationwide,” Truex said. “We’re both young and we’re both rookies.”

“We’re eager to go out and do the things we need to do to be successful,” Truex continued. “We both have the same mindset.”

“So, we should be able to feed off each other and make each other better.”

“I think it’s the biggest rookie class since 2001,” Truex said. “The best thing about it is that everyone in it is a proven winner.”

“And they’ve all climbed their way to the top, shown that they deserve to be there and they have done a great job in every kind of race car,” Truex continued. “I think it will be a battle until the end.”

“There are some really heavy hitters in there, like Austin Dillon,” Truex said. “I think he will definitely be the point that we’ll all base ourselves off of.”

“I think it will be really competitive.”

While Truex is optimistic about the upcoming year, he is also realistic in his expectations going into the 2014 season.

“BK Racing is still a young team in Sprint Cup,” Truex said. “They’ve gone through the growing pains and they know what they have to do to be successful.”

“They are putting the right people and pieces in place to do it,” Truex continued. “I don’t see any reason why we can’t go out, run all the laps, stay on the lead lap and get a top-25 finish.”

“If we do all that and don’t make any mistakes, there is no reason why we can’t do that.”

While Truex is now experiencing the ‘high’ of a full-time Cup ride, he also has known the struggles of coming up through the ranks, from K&N East Champion to being a brand new rookie again.

“The past few years, even just running part-time and struggling to find funding, it’s been pretty frustrating,” Truex said. “But you can’t let any negative thoughts set in.”

“You’ve got to keep fighting for it and stay optimistic,” Truex continued. “I think it will be the same mindset this year.”

“Every team has ups and downs and it’s the good teams and good drivers that can pull through,” Truex said. “You have to realize your mistakes and improve from them.”

“That will be the biggest thing for me this year,” Truex continued. “You’ve got to have the right mindset and execute.”

So, what will the youngest Truex brother think when he gets the chance to be on the sport’s biggest stage in the first race of the season, the Daytona 500?

“That’s a good question,” Truex said. “I haven’t even thought about it.”

“It still hasn’t set in yet that I’m running full-time,” Truex continued. “Places like Daytona and racing in the Daytona 500 with all that history and with people like Earnhardt and Petty, it’s pretty crazy.”

“And it’s pretty crazy just to think that I’ve made it this far,” Truex said. “Driving in the Sprint Cup Series has been a goal since I started racing, and to start this next chapter with BK Racing makes it extra special.”

“I am very excited for this opportunity.”