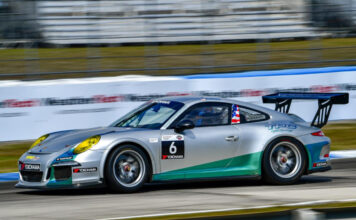 Both drivers made their professional debuts in the season opening weekend, and hope to build on those performances at Barber Motorsports Park. Coaching from TPC Racing and veteran racer Spencer Pumpelly helps to accelerate that process.

Lorndale scored a pair of sixth-place finishes at Sebring.

“Sebring was a solid start to the season,” Lorndale said. “There is plenty of room for improvement. I’m looking forward to taking steps in that direction at Barber. We tested at Barber in February. That is my only experience there. It is a challenging track with several blind turns. I’ve been reviewing video and data and look forward to returning. Passing at Barber is not easy, so qualifying will be important. I’m shooting for solid qualifying sessions and then races.”

Torres ran in podium positions early in both races at Sebring, but debris kicked up by other cars ended his day too early in both cases. Still, he’ll carry those positives into rounds three and four.

“I’m very excited and can’t wait to get back in the car,” Torres said. “The guys at TPC Racing did a fantastic job doing putting the car back together. I’ve never raced at Barber but did one test day about a month ago. The facility is unbelievable, and I can’t wait to see it with spectators and under a full race day. My goals this weekend, above all, will be to ensure we have a race weekend without any issues and finish the races. With that said, that does not deter me from pushing as much as possible and try to get my first podium. Hopefully with the help of Spencer and the guys I can be on pace and get there.”

The Porsche Sprint Challenge North America by Yokohama weekend gets underway on Friday, April 16, with a pair of 50-minute practices and qualifying at 4:45 p.m. CDT. The first 40-minute race of the weekend is at 8:55 a.m. CDT on Saturday morning, with the second race at 11:25 a.m. CDT on Sunday, April 18.