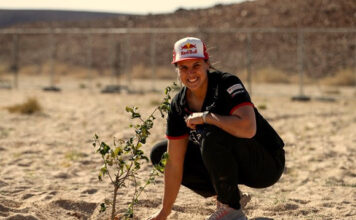 4 August 2022, London: A huge number of entries were received by SVG this year from all around Europe. The coveted accolade recognises and rewards individuals, companies, projects, or initiatives from across the sports broadcasting and production sector that can demonstrate an impactful contribution to the transition to a net-zero carbon and zero waste society.

As a sport that is built out of social purpose, but with racing at its core, Extreme E utilises its platform to promote electrification, sustainability and gender equality. Racing in remote locations damaged by climate change or human interference, the carton-neutral series aims to maximise awareness around these critical issues, whilst minimising the environmental impact.

Ali Russell, Chief Marketing Officer at Extreme E, said, “We are delighted to have reached the list of finalists for SVG’s One Planet Award for Sustainability in Sports TV.

“Nothing beats recognition of the incredible hard work that we at Extreme E and our teams and partners have all done in highlighting environmental issues and promoting sustainability whilst at the same time delivering a thrilling racing spectacle to millions of viewers around the world.

“Extreme E’s entire ethos was born out of a mission to race without a trace and everywhere we go, we work to restore the degraded environments in which we race via our legacy programmes. We are also immensely proud to have officially become a carbon neutral race series – a momentous goal which we have managed to achieve in less than two years of racing.”

James Pearce, Partnerships Director at Aurora Media Worldwide, said: “From the outset it was clear that Extreme E’s mission statement and entire championship ethos was going to set a new bar for the industry. We knew as their production partner we had to set new sustainability standards and treat this production in a unique way.

“Through innovation, technology and strong partnerships with Extreme E and our trusted suppliers, we have been able to deliver a world-first remote and cutting-edge entertainment product with sustainability and Extreme E’s purpose driven mission at its heart. The production is acknowledged as a three-star Albert – Carbon Neutral Sustainable Production, a status we are hugely proud of.

“We are grateful to be on this journey with Extreme E and the industry recognition drives us forward to continue improving our processes and affecting industry change.”

Winners of the SGV Sports TV Awards will be announced in a ceremony at the DeLaMar Theatre in Amsterdam on Thursday 8 September.

Extreme E is a radical new racing series, which will see electric SUVs competing in extreme environments around the world which have already been damaged or affected by climate and environmental issues. The five-race global voyage highlights the impact of climate change and human interference in some of the world’s most remote locations and promotes the adoption of electric vehicles in the quest for a lower carbon future for the planet.

To minimise local impact, Extreme E races will not be open to spectators, with fans instead invited to follow the action through live TV broadcast, and on social media.

The St. Helena, a former passenger cargo ship, has undergone a multi-million Euro refit to minimise emissions and transform her into Extreme E’s operations hub. The ship will be used to transport the championship’s freight and infrastructure, including vehicles, to the nearest port, minimising Extreme E’s footprint, as well as being used to facilitate scientific research through its on-board laboratory.

Extreme E is also pioneering hydrogen fuel cell technology which will enable its race fleet to be charged using zero emission energy. This innovative solution from AFC Energy uses water and sun to generate hydrogen power. Not only will this process emit no greenhouse emissions, its only by-product will be water, which will be utilised elsewhere on-site.