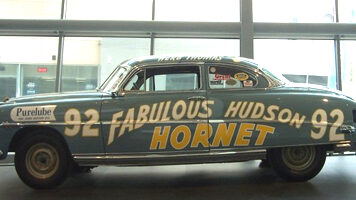 Even the most casual NASCAR fan has heard of Richard Petty, Bobby Allison or Dale Earnhardt.  If you really want to know the heart of stock car racing, you sometimes need to dig below the surface. If you take the time to do that, you’re often rewarded with a hidden gem.

On my excursion this month, I found a treasure in the guise of Herb Thomas.

Thomas doesn’t fit the stereotypical profile of most drivers in the 1950’s. He didn’t come from a racing family and he didn’t hone his driving skills running moonshine. You won’t hear tales about a flashy lifestyle of drinking and carousing.

While others grabbed headlines, Thomas was busy winning races.

Herb Thomas was a pioneer of stock car racing in every sense of the word.

He was there when it all began at the first NASCAR sanctioned race at Charlotte Speedway in 1949. Thomas was the first two time Cup Series champion, the first owner/driver to win a championship and the first three-time winner of the historic Darlington Southern 500.

Although he only drove seven full seasons, he was one of the most successful drivers of his era.  But that’s only part of the story. Over fifty years later, Thomas still holds the record as the driver with the highest winning percentage in the history of the sport.

Herbert Watson Thomas was born in the small town of Olivia, North Carolina in 1923. He worked as a farmer and later at a saw mill before he ventured into the world of racing.

At first, racing was just a hobby for Thomas but it didn’t take long before he began to see the possibilities. When Bill France began organizing races under the newly formed NASCAR banner, Thomas was ready for the challenge.

He also became friends with Bill France who would often stop by to visit Thomas and his wife, Helen, when he was out that way posting flyers for the next race. It seems France couldn’t pass up a chance for one of Helen’s home cooked meals.

Thomas raced as an owner/driver, pouring most of his winnings back into the car.  In his first full season of competition in 1950, Thomas claimed his first victory at Martinsville Speedway.

His career took off in 1951 when he began driving what would come to be known as the “Fabulous Hudson Hornet.” Thomas also joined up with the legendary Smokey Yunick and began a partnership that would prove to be almost unbeatable.

This was also the year that Thomas would win his first Southern 500 at Darlington. After seven total victories that season, he went on to capture his first championship, beating out rival Fonty Flock by a narrow margin.

Thomas was back with a vengeance the following year with an impressive eight wins but lost the championship to Tim Flock and had to settle for second place.

During the 1953 season, Thomas scored a series record of twelve race wins. His domination gained him another title and he became the first two-time champion.

The next year Thomas was once again fighting for the championship. He won another twelve races including a second Southern 500 win, making him the first two-time winner of the race. In the end, he lost the championship to Lee Petty who proved that sometimes consistency can be the key to victory. Thomas had to settle for second place again.

The 1955 season proved to be a pivotal point in Thomas’s career. While competing at a race in Charlotte, he was involved in a crash that would leave him sidelined for three months. Thomas vowed to not only return but to win races.

“Don’t worry about me.  I’ll be racing again by the time the Darlington 500 comes up in September. And I’ll win it again, too,” Thomas predicted.

When it was time for the Southern 500, Smokey Yunick devised a unique strategy.

The Flock brothers were touted as the ones to beat in their Chrysler 300’s. Thomas was running a smaller Chevrolet with less horsepower and was clearly considered the underdog.

But Yunick had a plan. He mounted a set of specially designed tires on the lightweight Chevrolet and instructed him to run a conservative pace.

It took him most of the race but with less than 100 laps to go, Thomas finally pulled into the lead. He went on to take the checkered flag after running the entire race on one set of tires.

The victory made Thomas the first three-time winner of the Southern 500.

Despite missing part of the season, Thomas had a total of three wins and finished in fifth place in the championship standings.

In 1956, Thomas won one race as an owner/driver and won another race while driving for Smokey Yunick. He then joined forces with Carl Kiekhaefer who had enticed Thomas to join his team with promises of more money and better equipment. It looked like a match made in heaven and Thomas won three consecutive races.

Their success was short lived. Thomas soon grew tired of traveling all over the country and became disillusioned with the partnership. By the end of the season, Thomas was once again racing as an owner/driver and had already clinched second place when his career came to an abrupt halt.

He was racing at a track in Shelby, North Carolina and had just passed Speedy Thompson for the lead. In retaliation, Thompson bumped Thomas’s rear bumper and sent him spinning head first into the outside guardrail.

From all accounts, at least six drivers crashed into Thomas’s car.  He suffered from a fractured skull, a badly lacerated scalp, a ruptured eardrum and internal injuries that left him in a coma. He was rushed to the hospital where he underwent brain surgery.

Thomas later said, “I don’t remember much about it. I remember passing Speedy and the last thing I remember is going straight into the wall.  That’s all I remember from that night.”

Thomas started in two races in 1957 and one in 1962, but with little success. Feeling like he’d lost his edge, he decided to retire from racing.

“Those boys were passing me in the turns when it used to be me passing them,” lamented Thomas.

With his racing days behind him, Thomas went back to tobacco farming and also owned a trucking company which he operated on a part time basis.

I had the opportunity to speak with Thomas’s grandson, and biggest fan, Chris. We talked about his famous grandfather and Chris shared a few special memories.

One of the things that Chris loved most about him was his sense of humor.

“When we were not working in tobacco, he was a joker. He loved to laugh and make others laugh.”

“Most of what I know about his racing, I learned from my Grandma Helen,” he told me. “You would have never known he was a NASCAR driver simply because he just did not talk about those days much.   You did know that he was a very hard working farmer who expected the best.”

I asked Chris if his grandfather had kept up with NASCAR.

“He never missed a race,” said Chris. “If a race was on, Granddaddy would be sitting there in his recliner, eyes glued to the television set.”

“Did he have a favorite driver?” I wondered.

Chris laughed and said that a friend of his had once asked his grandfather that question one day when they were at home watching a race.

Without a moment’s hesitation, Thomas said, “Hell, there’s only one man on the track, Dale.”

In racing and in life Herb Thomas always gave 100 percent. The legacy he left for his family was not all about trophies but more about life lessons.

“I think he wanted to be remembered for being the best that he could be at everything he did,” Chris proudly told me.

Smokey Yunick once said of Thomas, “Herb Thomas could really drive. He was smart in a race. He knew how to pace himself. He was as good as they came and they have never given him enough credit for his ability.”

The first owner/driver to win a title which he did twice.

Recipient of the Buddy Schuman Award for loyalty and outstanding contributions to NASCAR auto racing in 1957.

Inducted into the National Motorsports Press Association Hall of Fame in 1965.

Inducted into the North Carolina Sports Hall of Fame in 1992.

Inducted into the International Motorsports Hall of Fame in 1994.

Herb Thomas was the inspiration for the character “Doc Hudson” in the movie “Cars”.

Thomas won 48 times in series competition, a number that ranks 12th all time. His 48 victories in 228 starts equates to a series-record winning percentage of 21.05.

Thanks to howstuffworks.com and legendsofnascar.com for quotes.

Angela Campbell
A native of Charlotte, NC, Angela (Angie) was first introduced to racing by her father. An avid fan of NASCAR, she found a way to combine her love of racing with her passion for writing. Angie is also an award-winning member of the National Motorsports Press Association. Follow her on Twitter @angiecampbell_ for the latest NASCAR news and feature stories.
Previous articleKen Schrader Truck Series Advance: Las Vegas Motor Speedway
Next articleSurprising and Not Surprising: Heluva Good! Sour Cream Dips at the Glen

A.J. Allmendinger, driving his No. 16 Kaulig Racing Chevrolet, took advantage of a late-stage caution to get the lead and stay there taking the checkered flag.
Read more