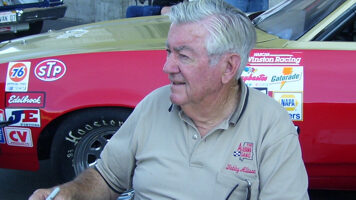 The memories of carefree moments from my youth are exactly what I received from last week’s announcement regarding the 2010 class of NASCAR’s Hall Of Fame. While everyone else was debating the merits of the five names on this year’s list, I was lost in my own private little world of family memories, our South Carolina home and how NASCAR racing played a role in our lives.

Like many residents of the southeast during the 1950’s our family quickly became NASCAR racing fans. This was the era of the sport when a racing season often exceeded 60 events. The teams raced on every track configuration from quarter mile dirt ovals to the mammoth Daytona International Raceway. The majority of these events were located in the southeast so there was no shortage of opportunity to see this exciting new sport.

My first ever NASCAR experience was in the summer of 1958 at a dirt track in Columbia-South Carolina. I was all of six years old at the time. This event was also the NASCAR debut that launched the racing career of King Richard Petty. I was thrilled to get autographs from both Richard and Lee Petty that night.

Dad eventually became a member of the Darlington Rescue Squad and that opened a brand new level of racing opportunity for his son. It meant spending race weekends there sleeping under the mammoth army tents. My job was to pass out aspirin and small Dixie Cups of water to infield campers who had way too much fun the night before. That job kept me quite busy on race day mornings. It also provided unfettered access to the raceway’s garage area where any autograph a young race fan could ever want was now available.

Over the years there were plenty of NASCAR themed family mini vacations. That included attending races at Darlington, Daytona, Atlanta and Charlotte plus the collection of paved and dirt short track ovals the series ran on back in the day.

All of those family memories came flooding back while monitoring the progress of NASCAR’s Hall Of Fame. Many of the video clips used to announce the newest members of the Hall looked very familiar to me. I was there to witness many of those moments first hand. That’s the true reason why the Hall Of Fame means so much to me. It’s those memories of quality time with my family. Over the years I jokingly said that it was NASCAR racing, along with Atlanta Braves baseball, that got Dad and me through the so called generation gap. It was something we could share together completely free of any form of hassle.

I was especially glad to see Bobby Allison receive his well deserved induction into this year’s Hall Of Fame class. I had a chance to talk racing with Allison last September when he was making a personal appearance at the Orange Show Speedway in San Bernardino.

Allison arrived in NASCAR’s upper tier of racing in the mid 1960’s driving a family owned independent Chevrolet Chevelle. Independent meant that Allison’s team wasn’t receiving the factory sponsorship support that was available to other teams. To help with the travel expenses associated with launching a national NASCAR career, the Allison team began selling two dollar memberships to their official fan club. Allison seemed amazed when he learned that I not only knew this but actually had one of those cards that was purchased in 1966 at Darlington. I suspect it was one of the last things he expected to hear while signing autographs in southern California.

Over the past week there has been a lot of lively debate from the NASCAR media and the fans regarding whom should have been inducted into the Hall Of Fame’s second class. The debate seems to be centered around Darrell Waltrip and Cale Yarborough being excluded from this year’s vote.

It’s not me for me to say which NASCAR icon needs to voted in the Hall and who should wait for at least another year. I can’t even comprehend the angst the voting committee went through to whittle 25 well deserving candidates down to five inductees. I wasn’t the least bit surprised to learn that the process took over a reported four hours to complete.

I’m just glad that there is a NASCAR Hall Of Fame, an official organization to honor those whose contributions created the sport we all enjoy today. I’m perfectly content reliving the memories of a NASCAR senior citizen despite the realization that I’m getting older by the minute.