NASCAR Announcement: A Gigantic Load Of Fail For The 2011 Season 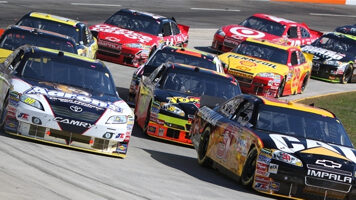 All aboard the Failboat!

Even though it’s been some months since I’ve been able to sit down at a keyboard and type the usual sort of revolting prose that I’m not really all that famous for, I haven’t been sitting idle. I am keeping track of what’s going on in NASCAR, but I’m also working on a few side projects (one being a possible Youtube automotive show of sorts), and following the pursuits of other types of auto racing. A lot has happened in my absence, but at the same time, nothing has changed.

Before I say anything else, there is a USA-version of Top Gear coming out on the History Channel….and from what I’ve seen of the new show….I cannot come up with another term more stupendously powerful than ‘it freaking sucks’. This show sucks so freaking badly, I’m ashamed to even be in the same country as the location it’s produced in. This show is proof that brain donors do indeed walk the earth. This show makes me psychotically envious of those who are legally blind and deaf. This show sucks so freaking badly, that you’d be hard-pressed to get better sucking results from a $300,000 Hoover vacuum cleaner.

BBC Top Gear presenter Jeremy Clarkson once said something to the effect that “Americans don’t ‘get’ Top Gear”.

It’s not the viewing Americans with the problem. We ‘get’ the show just fine and dandy. Well, I take that back, Democrats don’t get it.

It’s the idiots who produce the American ‘car’ shows who are the scourge behind this rampant, all-enveloping stupidity.

Want to see what I’m talking about? Watch a car show, any car show, that’s produced in the USA. Watch NASCAR racing on TV.

Both of these types of shows cater to….no one. Both types of shows are insults to the viewer’s intelligence….unless you’re a voting Democrat. I can think of a couple of shows on the Speed channel (or whatever it’s called)….but both grow boring rather quickly, as even these couple of shows constantly dip into the ‘Extreme!’ bucket for effect.

The only ‘shows’ on TV, for the car guy, that are worth watching, are Speedtv races….and BBC Top Gear.

To borrow from the British….utter rubbish.

I shut my cable off over a year ago because of how bad it’s really gotten with American cable networks. The American Top Gear is yet another sterling example.

Here is the formula for Top Gear USA:

10. Insert butt-rock music as much as possible (something you’d hear from the late 1980’s/early 1990’s), because we do it with every other ‘car guy’ TV show in existence, and they’re too stupid to notice anyway

Well, there you go, that’s pretty much the formula for the new USA Top Gear. Feel free to add your own additions to the ‘formula’ in the comment section down below. And yes, the ‘Youtube’ show project of mine revolves around something of a Top Gear UK-type of show….same basic idea, much-different layout and subject material, however….and it will include viewer participation.

There are other announcements and developments that are out there….or at least I think there are….however, nothing has been done as to what to do about the elephant in the room, namely why viewers are leaving this sport in droves.

I have a thought about that.

This series needs an overhaul. The failed COSHAT (Car of some hideous alternate tomorrow) hasn’t been updated in three years now, other than a spoiler change….wooo, what an upgrade….and it’s done nothing to improve ‘the racing’. Yes, it’s supposedly safer….nobody has been killed in one yet….but it punches such a huge hole in the air that anyone coming up on the leader has air taken off of the nose….and so we have race after race, where whoever gets in front during a pit stop pretty much has the lead for that round of green-flag racing….and people switch off the TV sets.

There’s another suggestion as to why nobody is watching….and it has nothing to do with racing.

I’m struggling with trying to identify the problem, simply because I think I’m suffering from ‘it’ also.

This isn’t just affecting how I read.

I can’t stand talking to slow people. If you’re talking like Forrest Gump, and in addition, sound like you are further impaired as if you’re overdosing on valium, I really cannot talk to you. I’ve already moved onto three or four other thoughts or conversation topics by the time you’ve finished saying ‘hello’. I’m not trying to be rude, I’m not trying to be a jerk, I’m simply operating at a speed at which you’re not, and unless I’m really trying to focus….you just lost me.

This is also how I feel when talking to people who vote democrat, but we all know that this particular disease is incurable, so I’ll put them into a ‘cuddly but dumb’ category, knowing that there’s nothing I can do for them and their mental illness….

However, moving on….I think what’s happened, is that our Information Age, along with fast-moving computer games, TV, and whatnot….it’s done something to the male population under 35. Think of it as ‘Acquired A.D.H.D’, where we’d really like to focus on a race….but if it’s not done in 10 laps….sorry, we’re done, and we’ve just checked our Facebook page, scanned through Drudge Report, gone through 3 different email accounts, and have eaten two frozen pizzas in the same space of time it takes a NASCAR announcer to say, “And there’s only 322 laps to go!”.

I’m going to spend more time working on this particular phenomenon….simply because I’m in this particular age bracket, and I’m curious if there isn’t  more to why we can’t watch an entire race….from any motorsport series….

But for now….have a good week. I hope to do this again sometime soon.

If at first you don’t succeed, call it ‘the Car of Tomorrow’.