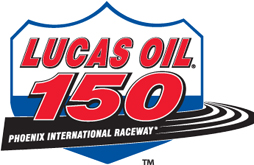 * He is an 8-time winner in the Truck Series

“Anytime we go west, I love it. Phoenix, California, Vegas – all that is where I grew up. All that is where I started racing. I raced an off-road car inside Phoenix International Raceway – I grew up watching Walker Evans race inside Phoenix. I guess I always have a different swagger when I go to the West Coast. It’s a little more intense because you are ‘local’ to the area,” explained Gaughan who holds to NKNPSW titles but has not yet been to the winner’s circle of PIR.

Gaughan and crew chief Bryan Berry agree that the off-season testing the team did at Disney World’s speedway should factor in favorably when the team unloads their Toyota in the desert.

“Turn one is where we learned the most at Disney and a lot of what we learned will apply to turns one and two at Phoenix. Brendan loves the track. The biggest challenge is for us to help him get the truck free enough that he can roll the centers of the corner, but not too free so that it hurts his entry into the corners,” explained Berry.

Gaughan loves his race truck for Phoenix, which will be chassis TRD-026.

“Phoenix is a track that I love as a driver. We’ve already tested the Phoenix South Point Hotel & Casino Tundra twice at Disney World so I feel really good about what we’re taking there,” said Gaughan. “Our truck at Daytona was one of the best trucks I’ve driven there in years. And it doesn’t come close to how good our truck is for Phoenix. I couldn’t be more excited.”

While heading west is fun and familiar for Gaughan, who grew up in Las Vegas and raced off-road in the area for several years. The westward trip also makes him consider the upcoming talent in the Truck Series field-a few fellow Tundra drivers that are fellow Vegas natives…

“The Truck Series is awesome racing. It always has an interesting blend of young, upcoming talent and wiley veteran racers. This year, Vision Aviation Racing has Justin Johnson and Dusty Davis racing – they are two fellow Vegas guys. Here’s a fun fact. I emceed Dusty Davis’ go-kart banquet when he won the championship when he was eight years-old,” said Gaughan with a pause and grin. “It’s cool to see a couple more Vegas boys coming up in the Toyota ranks, but, it’s sad to say.I feel a bit older because of it!”

Watch Gaughan in the No. 62 South Point Hotel & Casino Tundra on Friday, February 25th, at Phoenix International Raceway. Watch PIR excitement on SPEED starting with practice at 11:00 AM ET on Friday followed at 5 PM with qualifying and racing action at 8 PM. Or, tune your radio to your local MRN affiliate.

Germain Racing has earned two championship titles in the Truck Series. The Toyota team owns 22 victories and 9 pole awards in the series that continues to grow ratings on SPEED. For more information on Germain Racing, visit www.GermainRacing.com or follow the team on Twitter @GermainRacing.