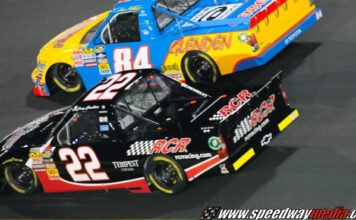 Joey Coulter is living a dream right, so far having what he calls a spectacular time at Richard Childress Racing.

Coulter began racing in 1998, racing go-karts at West Coast Kartway in Naples, Florida, and then also started running the WKA Horstman Gold Cup Series in 1999, followed by the Florida FASTTRUCK Series in late 2005. [/media-credit]In 2007, he moved up to the USAR Hooters Pro Cup Series, where he finished in the top 10 multiple times, including top-10s at the 2007 Thanksgiving Classic at Kenly and Baileys 300 at Martinsville Speedway. His first stock car victory, though, would come in December of 2008 at Southern National Raceway Park in Kenly, N.C.

The 2009 season marked his rookie year in the ARCA, which resulted in two poles, seven top-fives, 13 top-10s and a fourth-place finish in the season-ending point standings. Last season, he finished eighth in points while winning the Bill France Four Crown Award and his first victory at Berlin Raceway.

Following the final race of the ARCA Racing Series season at Rockingham, Coulter got the surprise phone call from RCR with an offer to drive a second truck for their team. Coulter immediately accepted, ready to make that jump up to the next level. In his first two starts this year, Coulter has already impressed as he was running up front at Daytona before a tire blew and finished ninth at Phoenix.

Coulter took some time out of his schedule to talk about the season so far and more.

Ashley McCubbin: What are your thoughts on the year so far?

Joey Coulter: So far it’s been spectacular. It’s really been going well and everybody over at RCR has been doing an awesome job kind of helping me out with getting ready for the race track and getting a handle on the truck. It’s really been a good experience. At Daytona, we had a really good qualifying run, we’re running real smart in the top 10 and blew a right front tire and ruined our night, but right before then we were having a real good night. Phoenix, for it being a hard track, to go from being terrible in practice to a finish in the top 10 was really good. The first two races have been really good. I mean, I didn’t think we’d do as good as we did with Phoenix being a tough track.

AM: What’s it been like working the guys, such as crew chief Harold Holly?

JC: Working with Harold has been great. I mean, him and I worked together with the ARCA cars and things have gone well. Our communication has carried well over to the truck. I feel like it’s really gotten better since then too. We’ve working two years with each other and he’s been great with helping me out and he’s been making some great changes to the truck.

AM: How did the deal coming together with Richard Childress?

JC: I was surprised to say the least. After the season finale at Rockingham in the ARCA series, I told Mike Perelli that we’d be doing this again next year and trying to win the championship. Looking over the whole year, there was nothing that stuck out a whole lot that I would say RCR would look at. There wasn’t anything that was really clearly there. I mean, we won at Berlin and we won the Bill France Award, but there never seemed to be that big moment.

Then a week after Rockingham, my dad called me and said to me that I needed to go over to RCR and they want to talk to you and I was like ha-ha you’re kidding. He said, ‘I’m dead serious. They want you there at 10 o’ clock for a meeting’. So from the ball got rolling and once we got up, there they showed us around the shop and we talked about some things and we signed.

AM: Speaking of the ARCA Series, how do you feel the experience has helped you?

JC: For one, when we go to some of these big race tracks, like I haven’t run most of these races, but when we go to places like Michigan, Iowa, Kansas, Chicago, places like that, it’s really going to pay off as I got lots of laps on those race tracks. You know in ARCA last year, things were really competitive as there were a ton of different winners. Only two people won twice, and there were a lot of different people running well and it really showed how good the competition there. I think the type of racing with that crowd of drivers really gets you prepared for the truck series because the competition jumps by 10. So just getting a little taste of that in the ARCA series really helps you out.

AM: What are some of your expectations for the year?

JC: Right now our expectation is to finish in the top 10 every weekend. Overall, for the entire year, we want to win rookie of the year. We feel with the experience from Austin winning it last year will help me a lot. I really don’t think rookie of the year is that far out of reach.

AM: What are some of your thoughts going into Darlington?

JC: I’m just really excited. I’ve just been talking to a lot of people about that place. I’ve never been there, never seen it, probably watched the last 10 races there the last couple of weeks trying to learn everything I can. I’ve talked to Austin Dillon a lot. I’ve just been doing a lot of talking to a lot of people. I’ve been trying to figure out what it’s like, what’s the tire wear like, what are some things you need to look out for. I’ve heard getting on pit road is really challenging so we’ll see how that plays out. It’s going to be exciting. I know I will have a really good truck when I get there. Austin ran really well there last year and we’re going back with the same set-up and I feel like we have a really good chance to get another top 10.

AM: There have been a lot of pictures being tweeted of what Speed is going to makeover (which will be shown during their pre-race show on Saturday). How has that gone?

JC: That was a lot of fun. We went to a bunch of different places and you got to watch it on Saturday as it was a lot of fun. I don’t think I’ve spent that much on clothes but it will be cool to show off our new look for the rest of the year. We had a good time.

AM: What is one of your favorite racing stories to tell?

JC: One of them is the phone call from RCR to get here because this is like – since I was eight years old, I’ve wanted to be a NASCAR driver and drive for a team like RCR, Hendrick, Roush and to get that phone call when I was least expecting, it is really cool. In the same year that we got our first win in the ARCA Series at Berlin, which was a race track that I didn’t really like the first time I went there and we just went back the second time and had a really good car and ran great and won the race and running well the next three races, that led us to winning the Bill France Crown Award. I guess, just last year as a whole was big for me.

AM: What are some of your hobbies?

JC: I’m a big RC car, like the little remote control nitro powered cars – I’ve got quite a few of them. They’re all like tricked out. When I get to go back down to Florida, I’m a big scuba diving fan as I do a ton of scuba diving, a lot of deep sea fishing and things like that.

JC: Race Hub, Wind Tunnel – I watch those a lot.

AM: Any specific topping?

SM Staff
Previous articleJack Roush Pleased with Strong Start to 2011 Season
Next articleSpending the Off Weekend in Darlington: Elliott Sadler Gets Another Shot in KHI’s No. 2 Truck

Larson clinches championship spot with a win at Texas