Will Power ready to defend his title in Saint Pete 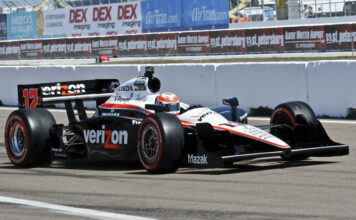 Will Power served notice to the rest of the field for the Honda Grand Prix of Saint Petersburg, that he was ready and able to defend his title. Power cruised to Victory at this event last year and intends to repeat this feat this year. Power was fastest during the third and final practice session for the IZOD Indy Cars Saturday morning, Mike Conway, making his return to Indy Car was second quickest with Castroneves, Briscoe and the 02 of Oriol Servia rounding out the top five. [/media-credit]The morning session was not without incident, shortly after the track went green Simona De Silvestro looped her car in turn eight of this beautiful 14 turn street course to bring the session under yellow, after a couple caution laps the green was displayed again and again turn eight would claim another victim, this time it was Danica Patrick. Both Simona and Danica were able to continue with no damage other than flat spotted tires. The third caution of the session came out for the off course excursion of Dario Franchitti, Dario ran into the turn 11 and 12 complex got into the grass and ended up near the tire wall between turns 13 and 14. Dario kept the car off the wall but did enough suspension damage to end his morning session, interestingly enough, Dario would still post the eighth fastest time of this morning session. The final incident was for team Lotus Driver E.J. Visio, E.J. would get into the safety barriers in turn 12 and do significant damage to the car, Visio was able to walk away from the mishap with no injuries.

As qualifying rolled around, the teams were forced to deal with the new tire rule for this season, which allows for just one set of the soft compound Firestones. These tires are known to be faster, but also wear more than the harder compound tires that most teams had been using for practice, this would leave the teams thinking they would have only five laps to post their fastest times,  one out lap, one in lap and three hot laps to get the job done.

Qualifying was marred by a grinding crash in turn three, Sebastian Bourdais making his return to Indy Car made contact with rookie Sebastien Saavedra sending him head on into the outside retaining wall. Saavedra was unhurt but the car was destroyed forcing the Conquest Racing Team to bring out the backup car in order to start the race tomorrow at noon. Saavedra said after the incident, “This is a blow to our team we operate on limited funds, we have a backup car available but losing a car is difficult”.

When all was said and done, Will Power would again be the fastest man in town with a fast lap just over one minute and one second around this 1.8 mile circuit. Dario Franchitti will start alongside Power on the front row Scott Dixon posted the third fastest time and will start on the inside of row two, Mike Conway will round out the second row, and Ryan Briscoe, and Justin Wilson will start fifth, and sixth respectively.

Will Power be able to repeat or will Franchitti or Dixon take charge? Maybe Conway can complete his return with a season opening victory, and of course Briscoe, Wilson, and another 18 teams may have something to say about the outcome also. The 7Th annual Honda Grand Prix goes green Sunday afternoon at 12:30PM.

SM Staff
Previous article
Hildebrand, Panther Set to Kick-Off IZOD IndyCar Series Season in St. Pete
Next article
Dale Earnhardt Jr. is back in the thick of things but says team can do better