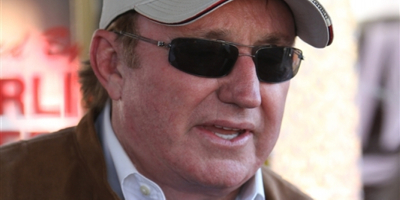 NASCAR president Mike Helton said Sunday morning that penalties will be announced for Richard Childress on Monday after his post Truck Series race fight with Kyle Busch.  NASCAR deemed that Busch’s involvement did not violate his NASCAR probation, therefore he will not receive any further sanctions from NASCAR.

“Obviously after last night’s incident, we began looking into it through the evening, and as recent as 15 minutes ago, meeting with different parties,” NASCAR President Mike Helton said. “We concluded that the driver of the 18 truck, Kyle Busch, did nothing to provoke or to cause the reactions that, in our opinion, would have violated probation. Did nothing that would have warranted the actions of Richard Childress.

“And so we’ll have to — once we get today’s race concluded, which is the focus of today, we’ll have to decide what NASCAR’s reaction is to Richard Childress as a member of NASCAR in an action against another NASCAR member.

“The biggest topic today, certainly, through the conversations outside of the incident itself was to be sure that today’s event went on correctly and safely for everybody involved, and both the Richard Childress Racing and Joe Gibbs Racing organizations, we have made it clear to them that our expectations is that both Joe Gibbs and Richard Childress meet with their teams to be sure that nobody from their organizations felt like there was anything that needed to be done from their side.

“So we’ll focus on today’s race now, and then quickly, maybe more quickly than normal, come back with our reaction as it relates to NASCAR member Richard Childress. ”

According to sources who spoke to SB Nation’s Jeff Gluck, Childress handed his watch to grandson Austin Dillon before punching Busch multiple times and putting him into a headlock.  Busch reportedly bent down to avoid further injuries, but Childress tried to land another shot once Busch returned to his feet, sources told Gluck.

Busch raced hard with Joey Coulter in the closing laps of the race, with the two drivers making contact coming towards the finish before Coulter eventually got the best of the two-truck race for fifth. After the checkers flew, Busch tapped Coulter’s driver side door panel.

“With as hot as it is and the tires, you know, had a bunch of laps on them, once the tires start sliding it’s really hard to get them to stop,” Coulter told media after the race. “And we [him and Busch] just run up towards the fence. I really hate that it happened because it was going to be a pretty exciting run to the line.  But, I guess that’s part of the mile and a half stuff.”

Busch is on NASCAR probation in all NASCAR series and events until June 15.