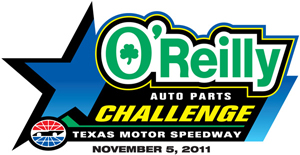 GONE TO TEXAS: Clint Bowyer and the No. 33 Rheem team head to the Lone Star State this week for the NASCAR Nationwide Series second visit of the season at Texas Motor Speedway. Bowyer has 10 starts in the series at the 1.5-mile track with two top-five and five top-10 finishes. In seven previous starts this season with the Kevin Harvick Inc. (KHI) team, the driver has collected three top-five and four top-10 results.

LOOKING FOR VICTORY LANE: KHI has 18 starts at Texas in the Nationwide Series with five top-five and 10 top-10 finishes. The organization’s record also includes 128 laps led, one pole with KHI co-owner Kevin Harvick in 2008 and a best finish of second in the 2009 spring race with NASCAR Sprint Cup Series champion Tony Stewart behind the wheel of the No. 33 Chevrolet.

CHASSIS HISTORY: For this weekend’s event at Texas, the No. 33 team chose chassis No. 071. The KHI team competed with this chassis 10 times thus far with a best finish of third twice (Harvick at Auto Club Speedway in March and Paul Menard at Texas Motor Speedway in April). Most recently, Menard drove this chassis to an eighth-place finish after starting from the pole at Charlotte Motor Speedway.

PREVIOUS RACE RECAP: Paul Menard joined the No. 33 KHI team for the final time this season for the Nationwide Series race at Charlotte Motor Speedway on October 14. Menard put the Rheem/Menards Chevrolet Impala on the pole for the second time in seven starts with the team and drove to an eighth-place finish.

THOUGHTS FROM THE DRIVER: CLINT BOWYER

“I’m looking forward to getting back in the Rheem Chevrolet this weekend at Texas, and I really want to get this No. 33 into victory lane before the end of the season. I’ve run decent at Texas but just haven’t had the finishes to really show for it. It’s always a fun place to go though and the racing is always great.”

Allmendinger returning to Kaulig Racing in 2021