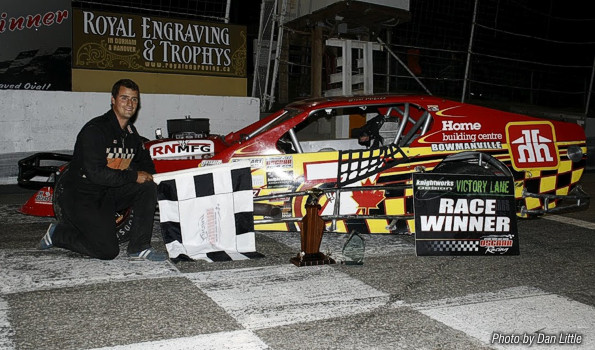 [/media-credit]By Clayton Johns (@cjohnsmedia) – Varney, ON – Brent McLean (#7 Home Building Centre of Bowmanville/Pro FX Signs/RN Manufacturing Chevrolet) capitalized on a last lap mishap involving race leader Gary McLean (#8 McLean Industrial Design Chevrolet) and Davey Terry (#14 Wasteco/Castrol Canada/Brennan Haulage Toyota) to earn his second OSCAAR Modified win and first Rick Woolner Memorial win in the 14thrunning of the annual 50-lap event at Varney Speedway Motorplex. The modified sophomore from Conn, ON held down the second spot for the entire race from the same starting position before leading the final two laps of a green-white-checkered finish. The win for McLean comes on a night that saw the mercury drop to four degrees centigrade at the conclusion of the feature and stands as the biggest in his young modified career.

“Unfortunately Gary got taken out, but you never know when it’s over. We were going around taking the white flag…she wasn’t over. I’ll take it,” said McLean.

“I never raced with Rick, but I’ve heard a whole lot of stories about him. This means a whole lot to win the biggest race of the year. I can’t even describe (the feeling), because I’m still in the shell shock of winning this race.”

McLean originally jumped out to the lead on lap three past polesitter Ted Patterson (#48 Chevrolet), before surrendering to cousin Gary on lap five.

A caution on lap nine for Patterson who came to a stop at the base of turn three slowed the race for the first of four times.

On the ensuing restart, Gary McLean began the process of growing his lead to the tune of a full straightaway through the course of a 24 lap green flag run. At the half way point, Gary led Brent McLean and Terry across the stripe with Monty Kelly (#96k At a Glance Scree Printing/Kelly Racing Chevrolet) and Brian McLean (#47 Home Building Centre of Bowmanville/McLean Farms Chevrolet) rounding out the top-five.

That lead would be erased on lap 33 for the night’s second restart following a backstretch spin by Patterson, who appeared to be battling an entirely different machine in the feature than in the afternoon heats.

Gary McLean continued to display his power on the restart as he denied Brent McLean any opportunity for the lead. Terry made a strong bid for the second spot after restarting on the bottom, but could not pull even with the youngest McLean. Terry’s disadvantage appeared to be his glowing brake rotors that kept him from carrying all his speed in to the high banked corners.

The field fanned out single file for eight more laps before the third yellow on lap 41. Caution flew after John Harper (#79 Transaxle Parts/Briar Dri-Wall/Grisdale Racing Products Chevrolet) came to a stop in turn three. The race would be red flagged for a short period as paramedics attended to Harper, who complained of abdominal pain.

That red flag would ultimately be the cause of the final caution that came on lap 50. With temperatures so low, the glowing rotors of Terry’s #14 Camry began to cool and crack during the stoppage. On the lap 41 restart, Terry was forced to pull to the infield without any brakes. While Gary McLean continued to lead the field under green, Terry renewed the brakes by re-pumping the pedal. Attempting to return for the final laps, although several laps down, Terry retook the track.

As McLean passed beneath the white flag from the hand of starter Kyle Mackenzie, all looked to be in the clear for the previous 9-time winner of the Rick Woolner event. With only a handful of lapped cars standing between Gary McLean and a clean tenth title, disaster struck.

As Terry entered turn one for the final circuit with McLean on his outside, the brake rotors on the #14 shattered and sent Terry straight in to the left-rear quarter panel of the #8. Just half a lap from victory. McLean would be forced to restart as the last car on the lead lap in fifth for a green-white-checkered finish, while Terry would go off on the hook.

“This was the fastest Wasteco Camry that we’ve had all year. The brakes got overheated…from all the green flag runs we were having. Unfortunately we took out Gary and ruined his chances here at the Memorial. I feel terrible about it. I know what this race means to them and I feel really bad,” explained a clearly emotional Terry.

However, the modified veteran was quick to reassure the OSCAAR rookie contender.

“I guess the #14, he had a mechanical issue and he got up in to us,” said a disappointed Gary McLean. “The likes of Davey Terry, probably one of the top, in my books, up-and-comers in the place. The kid’s going to go and do good things. I knew instantly there was nothing he did wrong, that is wasn’t intentional.”

“I’m upset, but more because the race means so much to us…than what took place.”

The incident handed the lead to Brent McLean for the first time since lap five, who’s biggest challenge would come from teammate and uncle Brian Mclean. Brent would surmount that challenge to earn his first Rick Woolner Memorial win and second OSCAAR Modified win on the inaugural tour.

“It’s unbelievable that this crew puts up with me the driver and gets this car out there all the time. It’s fast,” said McLean. “Two McLeans on the front row is pretty sweet.”

Also benefitting from the late race incident was third place finished Brandon Crumbie (#72 Amsoil/California Dave’s Autobody Chevrolet). Crumbie had been running fifth before the turn one melee. The Beeton, ON driver also moved back to a share of the Rookie Points lead, alongside Terry, which he has not held since August 4.

The OSCAAR Modified teams have little turnaround time as they are back in action in just one week at Sunset International Speedway for their second and final visit of 2012 as part of the Velocity Weekend. Qualifying will take place on Saturday at the high-banked 1/3-mile oval in Innisfil, ON with the 30-lap feature event running Sunday. Full schedule to follow.

UNOFFICIAL Championship Standings as of August 15, 2012