SS Green Light Racing Off to the Lone Star State 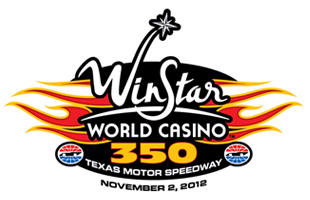 MOORESVILLE, NC – October 31, 2012 – SS Green Light Racing team heads to this weekend’s NASCAR Camping World Truck Series WinStar World Casino 350k for round two of 2012 at the fast mile and a half speedway just outside of Fort Worth, TX. With the season coming to a close, the truckers will be fighting hard for every position in the standings.

The WinStar World Casino 350k is the 20th of 22 races on the 2012 NCWTS Schedule and the SS Green Light Racing team has two trucks both locked-into the top-25 in the owners point standings.

On Friday night, Rookie contender Ross Chastain will be behind the wheel of the Wear Your Gear/Bobber.info Toyota No. 08 ad he will be joined by Jeff Agnew will pilot the Mark 4 Suzuki No. 07 for SS Green Light Racing on Friday evening after a strong performance last week at Martinsville.

“I’m happy that we have both of our trucks locked-in to the points,” said owner Bobby Dotter. “It has been an up and down year with some great runs and some bad racing luck but we have stuck together as a team and looking forward to the last few races. Everyone has done a good job with the resources we’ve had available to us all year long. Ross has show a lot of talent over the whole year and Jeff did a nice job for us in a handful of starts especially last week at Martinsville.”

The WinStar World Casino 350k is the 290th consecutive NCWTS start for the SS Green Light Racing team and the twenty-fifth career start for Chastain in the Truck Series. Ross is sixteenth in the NCWTS point standings and has three top-ten finishes in sixteen starts 2012 including a career best third at Bristol on August 22nd. Agnew is 31st in the standings with only nine starts so far this season with a best finish of fourteenth.

There are 37 trucks on the entry list for the WinStar World Casino 350k, which will prelude the NASCAR Sprint Cup AAA Texas 500 at the Texas Motor Speedway.