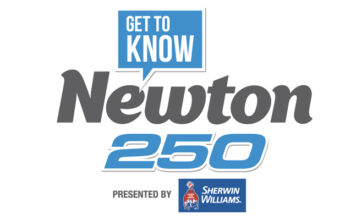 THE NEWS AND NOTES
THE Q & A

The No. 22 Discount Tire Ford Mustang

·    THREE-STRAIGHT: Ryan Blaney will return to the seat of the No. 22 Discount Tire Ford Mustang this weekend at Iowa, making this his third-straight NASCAR Nationwide Series (NNS) start. Previously, Blaney scored a top-10 at Richmond and finished 21st at Talladega after running up front most of the day.

·    DOUBLE-DUTY: This will be the second weekend in a row where Blaney will be racing double duty – however this time it will be a little different.  At Kansas, Blaney raced in the NASCAR Camping World Truck Series for Brad Keselowski Racing and made his NASCAR Sprint Cup Series debut for Team Penske. This weekend, Blaney will once again race in the Truck Series for BKR on Friday night in Charlotte.  Then, he will hop on a plane late Friday night and make the cross-country trek to Iowa, where he will practice, qualify and race the No. 22 Discount Tire Ford both Saturday and Sunday.

·    FIRST WIN: Blaney is still searching for his first win of 2014 but is no stranger to success at Iowa Speedway. In just three Truck Series starts, Blaney has two top-ten finishes and scored his first-career Truck Series victory at Iowa in 2012. Blaney also has two Nationwide Series starts at the .75-mile track and finished in the top-10 in both races.  He has also run three K&N Pro Series events at Iowa with a best finish of second, coming in 2012.

·    RUNNING UP FRONT: Despite the fact that Blaney is always looking for better finishes, a quick look at the stats – particularly driver rating – at his four races this season will show his strength when behind the wheel of the No. 22 Mustang. He’s been in the top-five in driver rating in three of his four events so far this season, resulting in a 104 driver rating for the year.

YOU HAVE A LOT OF SUCCESS AT IOWA SPEEDWAY. HOW WOULD YOU LIKE TO WIN YOUR FIRST NATIONWIDE SERIES RACE OF 2014 HERE?

“Iowa has been a great track to me and I have had a lot of racing success there. We have two top-10 finishes in the Nationwide Series and I also captured my first Truck Series win at the track, so it would be great to capture my first win of 2014 and Team Penske’s second Nationwide win of the season there. We have had fast race cars every weekend and we are capable of winning. It would be great to happen this weekend and gain more Owners’ Points.”

WILL RACING AT RICHMOND EARLIER THIS YEAR HELP YOU IN IOWA?

“They do have a lot of similarities about them.  But you can’t take too much from it.  The biggest help will probably be that Brad (Keselowski) was able to test there a couple of weeks ago with the team.  I know they took a lot of way from that.  But I’m sure there will be a few things I can take from Richmond. Plus, I have raced here twice in Nationwide Series cars, so I have some of my own notes and ideas to go off of when we get there.”

Official Release
Previous articleRiggs back behind wheel of No. 92 Ford for NCEL 200
Next articleArmed Forces Foundation and Chevrolet Join TBR’s “Salute the Troops” Campaign