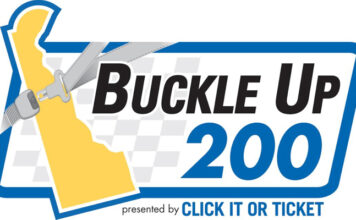 DOVER, Del. – The Delaware Office of Highway Safety and Dover International Speedway have teamed up for the “Buckle Up 200 presented by Click It or Ticket” NASCAR Nationwide Series race, set for 2 p.m. on Saturday, May 31, 2014.

Throughout the May 30-June 1, 2014 race weekend at the Monster Mile, the Delaware Office of Highway Safety (OHS) will promote and educate fans on the importance of wearing a seat belt on every trip and the ramifications that come with failing to do so.

“We appreciate the continued support and partnership with Dover International Speedway to promote traffic safety in Delaware,” said Jana Simpler, director of OHS. “They are great partners and help us expand our messaging to reach and inform more individuals about the importance of buckling up to save lives on our roadways.”

The Click It or Ticket program, now 14 years old, is a national seat belt enforcement campaign aimed at saving lives by enforcing seat belt laws and ticketing motorists who fail to buckle up. OHS conducts year-round seat belt enforcement with state and local police agencies in Delaware, which is directed toward high crash locations and scheduled during times of the year when unrestrained crashes peak. This enforcement is coupled with several education and outreach activities throughout the state, including partnerships with schools, corporate agencies and little league organizations, as well as the “Buckle Up 200 presented by Click It or Ticket” with Dover International Speedway.

The enhanced partnership is an extension of an already existing relationship with the track, as OHS currently serves as the title sponsor for the Sept. 26 “Drive Sober 150” presented by the Delaware Office of Highway Safety NASCAR K&N Pro Series East race. In addition, OHS has an interactive display in the FanZone at Dover International Speedway races.

The Delaware Office of Highway Safety will also treat fans to a unique experience on Saturday morning of the race with the Open Track Session presented by Click It or Ticket. The event will include a free question-and-answer session with NASCAR Sprint Cup Series driver Jamie McMurray, as well as Sorenson and Harraka. Any ticketholder to the Saturday race will have the opportunity to enter the track at Gate 18 from 8 to 9 a.m. and walk the frontstretch of the Monster Mile.

“We couldn’t be happier that the Office of Highway Safety has decided to promote seat belt safety as part of our Saturday NASCAR Nationwide Series event this spring,” said Mike Tatoian, executive vice president and COO of Dover Motorsports, Inc. “Anytime someone gets in a car it’s important that they always remember to buckle up. It’s proven to save lives.”

For tickets or more information, call 800-441-RACE or visit DoverSpeedway.com. You can also keep up with the Monster Mile at Facebook.com/DoverInternationalSpeedway or on Twitter at @MonsterMile.

Dover Motorsports, Inc. (NYSE: DVD) is a leading promoter of NASCAR sanctioned motorsports events whose subsidiaries own and operate Dover International Speedway in Dover, Del. and Nashville Superspeedway near Nashville, Tenn. The company also hosts the annual Firefly Music Festival on its property each summer. Produced by Chicago-based Red Frog Events, the four day event features more than 100 bands on seven stages in The Woodlands at Dover International Speedway. For further information, log on to www.DoverMotorsports.com.