Omnicraft to Sponsor Wood Brothers’ No. 21 at Michigan June 18 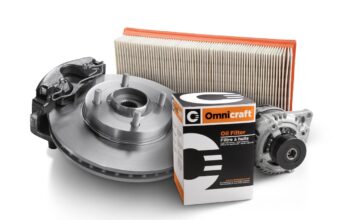 DEARBORN, Mich., June 13, 2017 – Omnicraft, Ford Motor Company’s new brand of quality replacement parts for non-Ford and non-Lincoln vehicles, will be the primary sponsor on the Wood Brothers Racing No. 21 Ford Fusion for the FireKeepers Casino 400 this weekend at Michigan International Speedway.

The new paint scheme will be unveiled in Victory Circle at MIS on Friday morning at 10 a.m., before the first Monster Energy NASCAR Cup Series practice of the weekend.

“It’s always fun to drive the No. 21 with a new paint scheme,” said driver Ryan Blaney. “This one is even more special since being able to service all makes and models with quality parts is important to Ford and Lincoln dealers as well as Quick Lane Tire and Auto Centers.”

Omnicraft, the first new parts brand offered by Ford Motor Company in 50 years, was launched in January to give Ford and Lincoln dealers and Quick Lane Tire and Auto Centers access to a complete family of quality and competitively priced parts to sell and to service all makes of vehicles. Adding Omnicraft to Ford’s family of parts brands to also cover non-Ford vehicles means an improved customer experience through competitive pricing, quality and convenience.

When fully launched, Omnicraft combined with Motorcraft, will cover up to about 90 percent of the vehicles on the road. It currently provides coverage for many popular repairs including oil filters, brake pads and rotors, loaded struts, starters and alternators.

“We can think of no better way to introduce the Omnicraft brand to the racing universe than by sponsoring the Wood Brothers’ famous No. 21,” said Brett Wheatley, executive director of North America, Ford Customer Service Division. “The Wood Brothers represent excellence on and off the race track and Omnicraft represents excellence in replacement auto parts.”

After winning last week’s race at Pocono, Blaney and the Wood Brothers will be going for back-to-back victories when they unload their newly minted Omnicraft Ford at Michigan. After close calls at Texas and Kansas this season, Blaney and his team broke through at the Tricky Triangle and scored a victory that was as popular in the grandstands as it was along pit road.

The Wood Brothers’ second-year driver is a legitimate threat to win at MIS. In his most-recent of four Cup starts at Michigan, last August, Blaney started seventh and finished fourth.

Omnicraft
Omnicraft is part of the Ford family of parts brands: Ford, Motorcraft and Omnicraft. Omnicraft is the exclusive non-Ford/Lincoln parts brand of premium aftermarket parts. With more than a century of parts heritage to build upon, Omnicraft provides excellent quality and fit and is a preferred choice of professional automotive technicians. To find out more about Omnicraft, visit www.omnicraftautoparts.com or contact your local Ford or Lincoln dealership.

Wood Brothers Racing
Wood Brothers Racing was formed in 1950 in Stuart, Va., by Hall of Famer Glen Wood. Wood Brothers Racing is the oldest active team and one of the winningest teams in NASCAR history. Since its founding, the team won 99 races (including at least one race in every decade for the last seven decades) and 117 poles in NASCA’s top-tier series. Fielding only Ford products for its entire history, the Wood Brothers own the longest association of any motorsports team with a single manufacturer. Glen’s brother, Leonard, is known for inventing the modern pit stop. The team currently runs the Motorcraft/Quick Lane Ford Fusion driven by Ryan Blaney in the famous No. 21 race car.

Official Release
Previous article
The Final Word – It was the thrill of victory at Pocono for one, but first a lot had to suffer the agony of defeat
Next article
Ford Performance NASCAR: Ford Looks To Continue Cup Success at Michigan