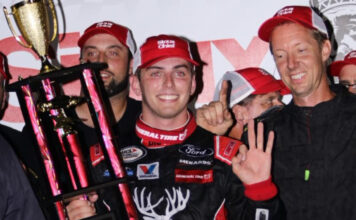 BROWNSBURG, Ind. (July 21, 2017) — Dalton Sargeant drove underneath Michael Self with eight laps to go, then scooted away to win the Sioux Chief PowerPEX 200 Friday night at Lucas Oil Raceway. The Boca Raton, Florida racer also inched closer to Austin Theriault in ARCA Racing Series presented by Menards championship standings with nine races left.
Sargeant, in the No. 77 Cunningham Motorsports-Big Tine Ford, also caught a break when Mother Nature intervened late in the going with just enough rain to bring out the final caution on lap 174. Sargeant darted onto pit road for four fresh General Tires with 20 laps remaining and, once the brief shower let up, took off like a rocket when the green flag unfurled for the final time on lap 189 of the 200-lap race.
When Sargeant got to Self, a great two-wide battled ensued for nearly two laps before Sargeant finally cleared the former leader for good. In the end, Sargeant beat Self to the line by a full second.
“I was just begging there at the end to go back to green,” said Sargeant. “Just a smart call from Chad (Bryant/crew chief) to stay out and pit when we did. Great car…great call. I knew it was going to take everything I had. We closed the points gap a little more…just really excited for the rest of the year.”
Self, in the No. 28 MDM Motorsports-Sinclair Lubricants Chevrolet, finished a career-best second. However, just before the last caution, Self, who led 29 laps, had built and second-and-half lead and was pulling away from everyone. Self had pitted with 70 laps to go for his last set of General Tires.
“If not for that last yellow, they never would have caught us,” said Self. “Our car was so loose in the beginning…wrecking every lap. But the crew took some big swings at it and put four fresh tires on it for that last run. If not for the rain, we would have won it. It was a really hard-fought race. The 77 made a smart call…they’re a championship team. I can’t complain, but I really want to win one.”
Chad Finley, in the No. 51 Auto Value-Air Lift Company Chevrolet, led 74 laps and finished third. Like Sargeant, he pitted under the last caution, but ran out of time trying to make his way back to the front.
“I’m disappointed,” said Finley. “I’m proud of my team…proud of my sponsors Auto Value, Air Lift, XLT…but I thought we had the best car…thought we were better than everyone. Car was phenomenal in clean air. We just didn’t have enough time. We needed one more caution. We’ll get ’em at Chicagoland.”
Championship leader Austin Theriault finished fourth in the No. 52 EJP Ford for Ken Schrader Racing. Self’s MDM teammate, Sheldon Creed, who led 25 laps, finished fifth in the No. 41 United Rentals Toyota.
The night started off great for Austin Cindric, setting a new one-lap track record in General Tire Pole Qualifying. Cindric, in the No. 99 Pirtek Ford, led the first 53 laps before he stalled on the track and brought out the first caution. Cindric’s crew got it fixed but not before he lost several laps. He was later involved in a frontstretch incident that resulted in damage to the back of his car. He eventually fell out just past the halfway point. That gave the lead to Riley Herbst who led the next 11 laps before Creed raced his way to the front. Creed then swapped the lead back and forth with Finley before Finley took control. But Finley eventually fell back on older tires while Self, on fresher tires, charged his way forward.
Gus Dean, Zane Smith, Bret Holmes, Shane Lee and Christian Eckes completed the top-10.
Sargeant, who won last time out at Iowa Speedway, unofficially trimmed Theriault’s points lead to 130, shaving 30 points off the leader. The ARCA Racing Series is off to Pocono Raceway next for the ModSpace 150 Friday, July 28.
RACE RESULTS