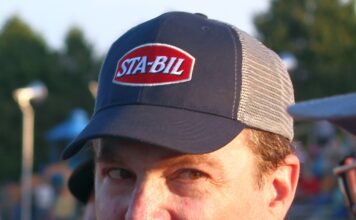 Indianapolis racing driver Stephen Cox will return to C7R Motorsports and the Super Cup Stock Car Series for a third consecutive year in 2018.

Cox, track record holder and 2017 race winner at Ohio’s Midvale Speedway, will participate in eight SCSCS events. He will vie for the Southern Division crown with support from STA-BIL Fuel Stabilizer.

“I’m really thankful to return to C7R, and I’m grateful that my friends at STA-BIL Fuel Stabilizer are back on board as well,” Cox said. “That kind of continuity is what makes good things happen for a race team. Our car was brand new last season and we had to sort through all the usual new car issues, but we were fast everywhere we went. And this year, we’ll be reliable as well.”

This will be Cox’s first time to race at Kingsport and UMI Motorsports Park, but he has considerable experience at the other tracks. In 2012, Cox posted a third place finish at Ona and he led briefly at Jennerstown last year before retiring with a blown engine.

In addition to his Super Cup oval schedule, Stephen Cox is also slated to compete in road racing events with the FIA’s EPCS sportscar series in Europe, as well as stateside competition with NASA and the World Racing League.

Official Release
Previous articleKasey Kahne – No. 95 Thorne Camaro ZL1 – Charlotte 1 Preview
Next articleThe Final Word – The Stars were out at Charlotte, including one Super Nova