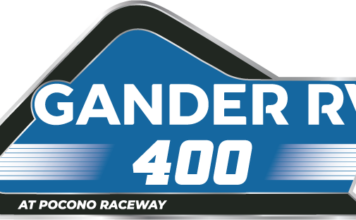 DANIEL SUAREZ, No. 41 Haas Automation Ford Mustang – HOW IMPORTANT IS THIS RACE WITH YOU BEING ON THE BUBBLE? “Every race is important, not just for the Playoffs. Every race is important and Pocono has been a good race track for us, not just this year but in year’s past. I really enjoy coming here a lot and we have a fast race car, so hopefully I can be in here talking to you guys again after qualifying. Track position as always is gonna be huge here and we’ve shown that we have good speed, so we just have to keep the car up there and hopefully have a good, clean day. I think that’s gonna be important as well. That’s something that, unfortunately in the last few weeks we’ve had very fast race cars, but we haven’t been able to show that because of a lot of little mistakes or bad luck situation. That won’t last for very long. We have to clean those things up and have the finishes that we deserve.”

DO YOU HAVE CONFIDENCE COMING INTO THIS WEEKEND? “Yeah, for sure. To be honest, probably two months ago I was a little concerned for the speed we were having in the race cars, but right now I feel much better. I feel like our cars are getting faster and we’re understanding a little bit more of where we need to be and that’s always something very important, so I feel very good about it. Our 41 Ford Mustang has been pretty sporty today. We tried a lot of different stuff in second practice that didn’t work, but we know where we need to be and the kind of car that we have. Hopefully, we can do a good job in qualifying today. I feel like we have a good shot for the pole and talk to you guys after that and get ready for tomorrow.”

WHAT KIND OF CHANGES DO YOU SEE NEXT WITH THERE BEING TWO RACES ON THE WEEKEND? “This kind of racing with two-day shows are a little bit different. They’re impound races. We qualify exactly the same way that we race and that’s always a little bit of a challenge because you cannot just focus on qualifying. You cannot change your balance a lot just for qualifying, you have to think of the race as well, so it’s a little bit different kind of a system that we have for these races, but it has worked well for us in the past. Like I said, the car has been pretty solid and I’m really looking forward to showing that later today in qualifying and in the race.”

WHAT DO YOU THINK ABOUT THE SEASON SO FAR COMPARED TO LAST YEAR? “It’s very hard to compare because there are a lot of things that are different. The race package, teams, engines – everything is different. The only thing that is the same are the race tracks, everything is different and even the race tracks are different now with the PJ1 and stuff. Everything is different, but I will say that the season has been probably one of the best years I have had in the Cup Series. I will say that without a question. Our team has been working really hard to build the speed that we deserve. I felt like we have been learning a lot in the first half of the year of what to do and what not to do and I feel like now we’re heading into a better direction. I felt like we were lacking some speed in the first quarter of the year for sure and in the second quarter we’re working back forward, and now I feel like we are moving in the right direction. I feel like it’s been a rushed year, but there are many factors involved in that. All I can tell you is I’m very excited for the second half of the year. The team has been working very hard and as you can see all four cars are moving together up the list.”

WHAT IS YOUR CONFIDENCE LEVEL GOING TO WATKINS GLEN NEXT WEEK? “If you think about it we have Pocono, we have Watkins Glen, we have Michigan and we have Bristol the next four races. There is no one race track that I don’t like, but there are some races tracks that for whatever reason I just get good results all the time. Pocono is one of them, Watkins Glen is one of them, Michigan is one of them and Bristol is one of them, so I feel very good about it. Our cars are getting better. We have very good races for us coming up and I don’t really know what else I could ask for. We have a lot of good things going our way and we just have to be smart. Like I said, the last couple of weeks we have had fast race cars and good race tracks, but haven’t been able to complete things. At Kentucky we had a flat tire. In New Hampshire we had a loose wheel and water on the race track and the 43 blocked me on pit road. I mean, everything that could have gone wrong went wrong, so we just need to have a clean day and finish the race the way that the car should finish the race. The car has been a top five car every week, so if we can do that, I think we’re gonna be having a little bit more fun.”