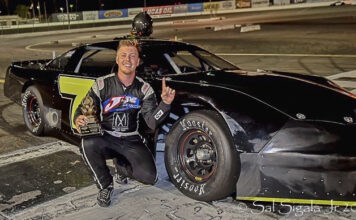 McGhee, 21, an avid Super Late Model driver from the West Coast will drive the team’s flagship No. 22 Ford Fusion in his first stock car race at the historic 1.0-mile oval.

This weekend, McGhee hopes to take his experience and the leadership of his Chad Bryant Racing team and contend for the win in the series’ second race of the season.

“What an unbelievable opportunity for me to be apart of the Chad Bryant Racing team this weekend at Phoenix,” said McGhee. “This is a great chance for me to make some noise in the ARCA Menards Series with one of the strongest teams in the series.

“I’m hoping that we can have a strong performance together on Friday night in what is expected to be a very stacked field of race cars.”

While McGhee’s experience at the Avondale, Ariz. race track is lacking, his Chad Bryant Racing participated in the ARCA Menards Series West finale last November at Phoenix hoping to build a notebook for Friday night’s race.

“The Chad Bryant Racing cars were fast last fall at Phoenix and most recently dominated the ARCA Menards Series East race at New Smyrna, so I’m looking forward to getting behind the wheel and driving some of the best equipment out there.

“I do realize that there is going to be a learning curve for me a little bit – at least at first getting used to the car but hopefully with guidance of Paul (Andrews) and Chad (Bryant team owner) we can get up to speed quickly and keep ourselves in the headlight throughout the race.

“Obviously, we’re going to Phoenix to win but I think if we leave there with a top-five finish – no one would complain about that either. I just can’t wait to get to the race track.”

Team owner Chad Bryant says his team is eager to work with another rookie and showcase their potential on the ARCA tour.

“Christian is well known along the West Coast and I think the opportunity he’s been given for Friday night is something he’ll maximize to his fullest potential,” said Bryant. “Our team still is riding the wave of confidence from our strong performance at New Smyrna and even hungrier to bounce back on the ARCA Menards Series after the Daytona disappointment.

“We learned a lot as a team last fall at Phoenix and I think with what we learned and Christian’s ability, we should have a good race on Friday night.”