It’s time to go about crowning a Champion 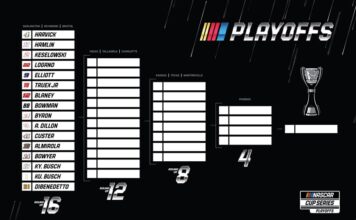 It has been a frantic season. Three, sometimes four races a week were the norm. Now, we are a little over two months away from crowning champions in NASCAR’s three national series. The old show started out with “they said it couldn’t be done.” Well, it was, thanks to NASCAR paying attention to the scientists and proper safeguards. They are to be applauded for that. They did it right from the beginning.

Saturday night, there was a tremendous elimination race at Daytona. It was a good one, but it saw the retiring Jimmie Johnson, a seven-time Cup champion, be eliminated. Johnson was caught up in a problem, not of his doing, but this is common at what is known as “plate races.” The big question for fans and those in charge amounts to a question about should these plate races, where anyone can win and anyone can crash out, be an elimination race? For many, it is not. Fans love the races at Talladega and Daytona, but this writer does not think it is fair for competitors. Yes, run those tracks, but give them a race to recover. I can only think about the guy who comes in solid in the Playoffs, gets wrecked early in a “Big One” and fails to make the cut, if he had 26 second-place finishes. Yes, that is extreme but possible. Let me know what you think.

The Cup drivers will be negotiating Darlington, Richmond, Bristol, Las Vegas, Talladega, Charlotte, Kansas, Texas, Martinsville, and Phoenix. Eliminations races will be held at Bristol, the ROVAL at Charlotte and Martinsville. The Final Four race for the championship is at Phoenix.

Who will win? I have no idea. Kevin Harvick, Denny Hamlin, Martin Truex, Jr., and Brad Keselowski have dominated, but who knows what will happen?

The biggest surprises for me were wins by Cole Custer and the guy who beat out Johnson for the Playoffs, seven-time champion Jimmie Johnson, so you never know. Watching will be fun. My only fear is a Covid-19 outbreak. So far, so good. So, buckle up let’s see what happens.

Ron Fleshmanhttp://www.ris-news.com
Ron Fleshman has followed NASCAR racing since attending his first race at Martinsville Speedway in 1964. He joined the Motor Sports Forum on the CompuServe network in the 1980s and became a reporter for Racing Information Systems in 1994. In 2002, he was named NASCAR Editor for RIS when it appeared on the World Wide Web as www.motorsportsforum.com. He can now be found at www.ris-news.com. Ron is a member of the American Auto Racing Writers and Broadcasters Association. You can find Ron following and reporting on the top three NASCAR divisions each week. As a lifer in his support of racing, he attends and reports on nearly 30 events a year and as a member of the motor sports media, his passion has been racing for 47 years. He lives with his family in rural West Virginia and works in the insurance industry when not on the road to another track.
Previous articleNHRA releases revised 2020 schedule, additional events canceled
Next articleKlausmeier to reach 100 Cup starts as crew chief