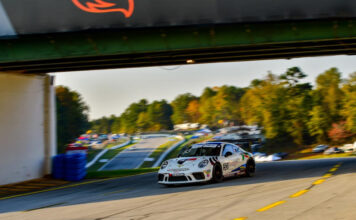 Dickinson started second in the No. 53 Moorespeed Porsche 911 GT3 Cup on a cool morning, quickly pulling away from the rest of the field and setting his aim on the leader. Dickinson kept the pressure up for the duration of the 45-minute timed race, going toe to toe for lap times, before finishing in second place.

“Riley matched pace for pace throughout the race and was right there the entire time,” Moorespeed President David Moore said. “We just couldn’t get to the lead. This wasn’t the result that we were hoping for, but we’re going to turn it around and come back again in just a few days at St. Pete to see if we can’t pick up some more wins.”

The Road Atlanta tripleheader event wraps up with a win Friday morning and two second-place finishes for Moorespeed and Dickinson at the 2.54-mile Georgia race track.

“It’s hard to look at just today,” Dickinson said. “You’ve got to look at the whole weekend. I feel like we did a lot of things right. It’s not a case of a weak link. I think coming out for St. Pete, we’ll have a strong performance and put it all together.”

About Moorespeed: Based in Austin, Texas, Moorespeed is a full-service automotive company specializing in sales, service, repairs and restoration of luxury sports cars and competition on the track in numerous North American road racing series. Founded in 1991 in Austin by brothers David and Chris Moore, Moorespeed offers comprehensive, turn-key service in which people are just as important as parts and relationships are just as vital as results. David Moore and Winslow Mankin, GM — Director of Customer Racing, welcome and work with every customer as a member of the Moorespeed family, regardless if they are racing or enjoying their sports car on the open road. Moorespeed’s road racing programs are designed for all skill levels, and driver development, both on and off the track, is a Moorespeed specialty. Moorespeed is all about the passion for high-performance automobiles and the people who drive them. A commitment to personal service and performance permeates every corner of the company. Learn more at www.moorespeed.com, and contact us at (512) 474-7223. Look for us on Facebook at www.facebook.com/MoorespeedRaceEngineering and Twitter @MoorespeedTX.