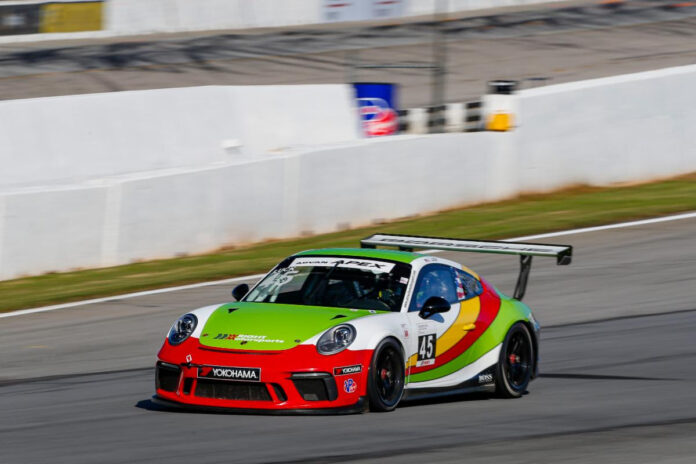 ST. PETERSBURG, Fla., (October 22, 2020) — Seven months after the cancellation of the season-opening event for the Porsche GT3 Cup Challenge USA at St. Petersburg, the series is back at the downtown street course this weekend for the penultimate event of 2020. Following the calendar rescheduling due to the early days of the COVID-19 pandemic, the two rounds at the Grand Prix of St. Petersburg will finally race on the circuit to October 23-25, running in conjunction with the NTT IndyCar Series.

Charlie Luck and the No. 45 Porsche will be the sole Wright Motorsports entry, coming off a highly successful weekend at the Road Atlanta triple-header last weekend. Luck swept all three podiums, claiming victory in each round. The strong performance gives him solid standing as second in the standings for the Platinum Masters Porsche GT3 Cup Challenge USA by Yokohama.

“Charlie has had such a strong season this year, and we’re expecting him to do well at St. Petersburg,” said Team Owner John Wright. “His performance at Road Atlanta shows his growth and development as a driver, and being the only street course on the 2020 schedule, it comes with new challenges for the field. We’re looking forward to racing this weekend.”

The Grand Prix of St. Petersburg will be the only event of the 2020 Cup calendar to feature a temporary street course. The 1.8-mile, 14-turn circuit is comprised of St. Petersburg’s downtown streets, blocked off to create a thrilling race course for fans and a demanding route for competitors. With little runoff area and concrete walls lining the sides, the circuit allows little room for error.

After two tripleheader events to make up for canceled rounds, the series will return to the traditional two-race format for the weekend, beginning with practice one, two, and qualifying on Friday, October 23. Race one and two will take place Saturday, October 24 at 1:55PM, and Sunday, October 25 at 12:40PM Eastern. Both 45-minute races will stream live on imsa.com.

Charlie Luck | No. 45 Porsche
I’m looking forward to the first street course race of my career. I believe the key to doing well here will be to qualify as close to the front as possible and finish well. The course has a lot of blind corners and there’s no room for error with concrete walls on both sides of 90% of the course. This will be a new challenge and a new learning experience that I’m very excited about and know that thoughtful race management will be key.

Who would have ever thought we would have had a clean sweep of winning all three races at Road Atlanta? I don’t know if this has ever been done in the history of IMSA with a three-race weekend set up. So many things came together for us: the car preparation was extremely good, the driver focus was one of my better performances, and we also had racing luck on our side, as Alan Metni had challenges as well. When I reflect over the four years of development that Wright Motorsports has taken me through, I’m so appreciative of the tremendous coaching that has been given to me by Jan Heylen, Bob Viglione, and John Wright. These three men have pushed me hard and have certainly had a major impact on my racecraft and ability to drive at a higher level.