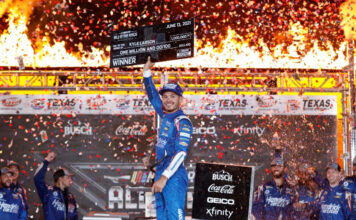 FORT WORTH, Texas (October 11, 2021) – Hendrick Motorsports driver Kyle Larson has witnessed first-hand how the NASCAR Cup Playoffs can quickly transform a championship favorite into a post-season bystander in just one round of the elimination format.

The Cup Series’ regular-season champion with a series-high seven wins has avoided calamity through the first two rounds to advance as the top seed in the Round of 8 that opens with Sunday’s Autotrader EchoPark Automotive 500 at Texas Motor Speedway (1 p.m. CT, TV: NBC and Peacock, Radio: PRN, SiriusXM Radio, 95.9The Ranch).

That wasn’t always the case for Larson during his tenure with Chip Ganassi Racing, where he qualified for the NASCAR Cup Playoffs in four consecutive seasons (2016-19) but only advanced to the Round of 8 once (’19). He was enjoying a similar season to this one in 2017 when he entered the NASCAR Cup Playoffs as the second seed and with the most regular-season wins (4).

And poof – his championship dreams were up in smoke in the second round known as the Round of 12.

“In 2017 at Ganassi that also was a really good year,” said Larson, the 29-year-old Californian in his first season with Hendrick Motorsports and ninth overall in the series. “Our playoffs did not go good. We had a lot of bad luck in the second round. But yes, this is even a better opportunity than then. We won the regular-season title, got more wins, more laps led, things like that. I feel that I’ve got a great group of guys and gals within the (number) 5 team but also Hendrick Motorsports and that definitely adds a lot of confidence for the playoffs.”

It seemed like it could be déjà vu all over again for Larson when early in Sunday’s race at the Charlotte ROVAL his No. 5 Chevrolet was having electrical issues. The team was able to change the battery and alternator belt under caution to keep him on the lead lap and avoid flirting with elimination. With the problem resolved, Larson carved his way through the field and secured an improbable victory.

Through the first two rounds, Larson has five top-10 finishes in six races, highlighted by wins at the Charlotte ROVAL and Bristol along with a runner-up finish at Darlington. He opens the Round of 8 at Texas Motor Speedway, where he collected $1 million for winning the NASCAR All-Star Race in June. Larson doesn’t believe that signature victory, however, brings added momentum as much as the type of track.

“I think it just being a mile-and-a-half race track in general I think is good for us,” said Larson, who earned two wins this season on the 1.5-mile ovals at Las Vegas and Charlotte. “We won the All-Star Race, but we weren’t that amazing until the end of it. My car drove not great. Hopefully, we’ll be a little bit better and more balanced to start the race and can adjust on it from there and hopefully find ourselves in Victory Lane again.

“I always look forward to going to Texas for the area. I love going to Fort Worth, there’s great food there and then the racing is exciting as well. You get big drafts and close racing kind of all race long. You have to execute well throughout the whole race because it is tough to pass.”

Larson is motivated with his pursuit of a first Cup Series championship one step closer but, more importantly, to even have the opportunity to be competing in the sport he cherishes so much.

In April of last year, he uttered a racial slur over the radio while competing in an iRacing event during the pandemic and suddenly his NASCAR future was severely in doubt. Larson, of Japanese descent and a graduate of NASCAR’s Drive for Diversity program, was immediately suspended indefinitely by NASCAR with a mandate to undergo sensitivity training as part of the reinstatement process. He was fired by Chip Ganassi Racing and his livelihood came to a screeching halt for him, wife Katelyn and two young children, Owen and Audrey.

The sensitivity training was just the start as Larson took several more steps on his own while taking accountability and responsibility for his actions. He penned an open letter on his website in October of 2020 apologizing for his actions, hired an inclusion coach, participated in a variety of classes and took special visits to learn more about the African-American community.

He volunteered for the Sanneh Foundation and joined them in visiting the George Floyd Memorial in Minneapolis to pay his respects. He visited Olympic great Jackie Joyner-Kersee and her community center in St. Louis. He began the Kyle Larson Foundation, which is dedicated to bringing people together and providing support to hands-on charitable organizations that benefit today’s youth, families and communities in need.

“It’s been cool this year to get another opportunity to succeed at the Cup level on the race track,” Larson said. “Then off the race track, with everything that happened last year it’s nice to try and show people who I really am as a person and change some opinions of myself over time.

“I’ve enjoyed getting my foundation started. It’s always been something I wanted to do. I just didn’t know what I wanted to do with it, so it’s been cool to meet a lot of people last year with it and now have my foundation to support those people and those communities and raise a good amount of money to share. It’s been neat to learn about it and I look forward to growing it all in the future.”

He has especially enjoyed supporting the Urban Youth Racing School in Philadelphia.

“There have been a lot of experiences that I’ve gotten to do but just growing a closer connection with the Urban Youth Racing School in Philadelphia has been neat,” Larson said. “Supplying them with racing simulators, building friendships with some of the kids and they’re just picking up the phone to call me and you’re getting advice on how to get around a certain race track I think has been cool to have those close relationships. But like I said, there has been a lot of stuff I’ve done that has been meaningful.”

While Larson was making significant strides in his personal life, there was still the big question looming if any organization would take a chance on him in the Cup Series upon being reinstated. Team owner Rick Hendrick watched Larson’s actions and opted to give him a second chance. Larson, who spent time dirt racing while under the NASCAR suspension, didn’t miss a beat as he captured his first Cup win of the season at Las Vegas in just the fourth race.

“Everybody has been amazing to work with …I really enjoy working with my crew chief, Cliff Daniels,” Larson said. “He is just a great team leader – a young guy not much older than myself. I think his leadership skills give everybody a lot of confidence. He’s definitely made me a better race car driver, for sure.”

The chemistry and equipment, including Chevrolet power, have been there from the outset and Larson took advantage of all of it with a strong regular season and now advancing to the Round of 8. He needs to produce this round – which consists of Texas, Kansas (Oct. 24) and Martinsville (Oct. 31) – to advance to the Championship 4 at Phoenix Raceway (Nov. 7) and have an opportunity at that first title. They plan to go about business as usual.

“I feel like we’ve been pretty good in all areas,” Larson said. “I think if you can get all areas a little bit better that’s a good thing. We’ve done a great job executing I feel like most races and that’s important when you don’t have an amazing race car and you can execute and at least finish where you deserve that’s usually a good day. Just continue to do that and do all the little things right and hopefully we’ll leave ourselves a good shot.

“I knew we were going to be good. … I didn’t know we would be as good as we are but very thankful that I’m at an amazing organization with amazing leaders and just the greatest resources.”

STAY CONNECTED
Keep track of all of Texas Motor Speedway’s events by following on Facebook, Twitter and Instagram. Keep up with all the latest news and information on the speedway website and TMS mobile app.

ABOUT TEXAS MOTOR SPEEDWAY
Texas Motor Speedway is among the largest sports stadiums in the United States and features an array of amenities such as the world’s largest TV that make it one of the premier venues in the world of sports. The 1.5-mile superspeedway located in Fort Worth hosts all three NASCAR national series as well as the NTT IndyCar Series among its various races and specialty events throughout the year. Since opening in 1997, Texas Motor Speedway has generated an annual economic impact of approximately $300 million to the North Texas region. Texas Motor Speedway is owned and operated by Speedway Motorsports, LLC, a leading marketer and promoter of motorsports entertainment in the United States. For more information, please visit texasmotorspeedway.com.