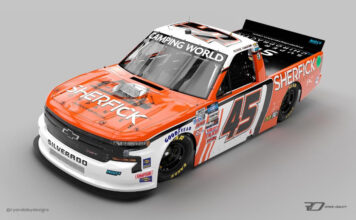 The Oct. 30 running of the United Rentals 200 will mark Hacker’s third career start in one of NASCAR’s national divisions, but also provide an opportunity to highlight two new partners Sherfick Companies and Super DOPE Chiropractic Inc. (SDC) in the Truck Series for one of their most anticipated races of the season.

Sherfick Companies is a family-owned real estate development and construction business with experience in commercial and residential construction and design.

Michael and Gabby Sherfick team up on the designs, while Gabby takes the lead on all the important finishes that attract clients and home buyers from all around the globe. She is also a licensed real estate agent who serves at the company’s forefront.

Martinsville will mark the Sherfick’s second investment in the sport of NASCAR. Earlier this year, the team was a partner in the NASCAR Cup Series with StarCom Racing and driver Quin Houff at the Indianapolis Motor Speedway Road Course.

The historic Virginia short track will however be the debut in the sport for Super DOPE Chiropractic.

SDC is an Indianapolis-based Chiropractic business with one location downtown and one in Carmel with five additional locations in the works.

Like Michael Sherfick, Dr. Coberly is an Army veteran and is passionate about improving the lives of the community around him.

“It was a no-brainer when Mike approached me about sponsoring Chris and the Niece Motorsports truck,” offered Dr. Coberly. “Chris Hacker is a Noblesville native and opportunities like this do not come around often.”

Hacker is counting down the days to his return to the Truck Series.

“I am very thankful and humbled to represent Sherfick Companies and Super DOPE Chiropractic at Martinsville Speedway,” said Hacker. “It is great to see new companies who are enjoying the benefits of a partnership in NASCAR and eager to explore further opportunities.

“They could easily have chosen to continue to have a presence in the NASCAR Cup Series, but they have jumped aboard the NASCAR Camping World Truck Series train with myself and Niece Motorsports. I’m excited about wheeling the No. 45 Sherfick Companies | Super DOPE Chiropractic Chevrolet Silverado at a short track.”

With the Sherfick’s and Dr. Coberly both living in Noblesville and Hacker being a native of Noblesville – the pressure is on to perform for the hometown.

“Martinsville is a huge opportunity to represent two companies that are local to me back in Indiana, so of course I want to go to the track and put our No. 45 Sherfick Companies | Super DOPE Chiropractic Chevrolet Silverado in the top-10.

That race is never easy though. There are going to be a lot of drivers on different agendas, but we just need to stay focused on our plan and hope we are rewarded at the end with a great finish and some welcomed exposure.”

“We are no strangers to racing and with Niece Motorsports equipment, we feel Chris has a really good chance for a strong finish,” offered Michael Sherfick.

Dr. Coberly added, “Super DOPE Chiropractic is excited to be along for Chris Hacker’s journey in the NASCAR Camping World Truck Series. I look forward to a great race and even better finish on Saturday afternoon.

The penultimate race of the 2021 NCWTS will be Hacker’s second race with Mooresville, N.C.-based Niece Motorsports. Hacker made his debut for the organization at Las Vegas (Nev.) Motor Speedway in September.

Hacker began racing when he was eight years old, and at age 13 became the youngest driver to win in the Champions Racing Association Late Model Series.

Last year, Hacker made his NASCAR debut in the ARCA Menards West Series at Phoenix (Ariz.) Raceway, where he earned a noteworthy top-15 finish.

In addition to his ARCA starts, Hacker made his NASCAR Camping World Truck Series debut at World Wide Technology Raceway at Gateway in August, in the No. 34 Reaume Brothers Racing entry.

Niece Equipment’s reputation is built on service, integrity and dependability. The company provides water and fuel/lube trucks that are engineered with quality and durability in mind for the construction and mining industry.