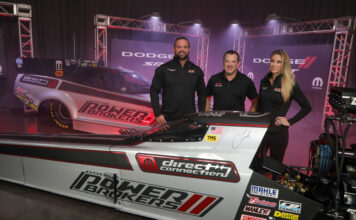 In addition to being the manufacturer for TSR, Dodge//SRT and Mopar will be the anchor partners for Pruett and Hagan. Their nitro-fueled machines will have primary branding from Dodge Power Brokers and Direct Connection.

“The Dodge brand has a long history of competing in and supporting motorsports,” said Tim Kuniskis, Dodge Brand Chief Executive Officer – Stellantis. “For nearly a decade, NHRA drag racing has been our primary motorsports focus, helping deliver products like the Dodge Demon, 1320 and Super Stock; cars that resonate with the Brotherhood of Muscle. These vehicles will hold a place in muscle-car history for years to come. The Dodge brand embodies the philosophy of the ‘last tenth,’ and we are not done pushing the performance envelope. So, we are extremely excited to partner with Tony Stewart and his drag racing team to help take Dodge to the next level. Tony is a racing legend with an attitude, personality and competitive drive that aligns perfectly with our goals.”

TSR’s roots are in sprint car racing, with Mopar powering its multiple entries in USAC and the World of Outlaws from 2001 through 2007. Seven of TSR’s 27 open-wheel championships were won with Mopar.

“I’m really pleased to have Dodge//SRT and Mopar as partners with our new NHRA venture as manufacturer and sponsor for our two entries in Top Fuel and Funny Car with Leah and Matt,” said Tony Stewart, TSR team owner and multi-time racing champion. “It shows confidence in your program when an OEM wants to be on your team and for you to help support their program as well. They have obviously had a great relationship with both drivers for the last few years and to be able to continue that association is key to this team’s success and a huge benefit to the continuity for everyone involved. Having that kind of history definitely helps flatten the learning curve while raising expectations for our inaugural NHRA season. It’ll be nice to work with Dodge and Mopar again after sharing success together in USAC and the World of Outlaws nearly two decades ago. We are certainly setting the bar high and look forward to being competitive from the start.”

“I’m so grateful to have represented and shared so many successes with Dodge//SRT and Mopar for most of my career and to say I’m excited to continue our relationship in this next chapter with Tony Stewart Racing is an understatement,” Hagan said. “I’m looking forward to the challenge ahead and introducing our passionate fans to a new-look livery featuring Dodge Power Brokers and Direct Connection.

“My family has been a Dodge dealer since 1979 and we’re really proud of that. We’re ready to celebrate Mopar’s 85th anniversary this year as we battle for a championship with a few wins along the way.”

Pruett is a nine-time Top Fuel event winner whose career-best elapsed time run is 3.631 seconds (Nov. 10, 2018 in Q4 at Pomona, California) and her best speed is 334.15 mph (Feb. 24, 2018 in Q3 at Phoenix). The 2022 season will mark her 26th consecutive year of NHRA competition, which began in the series’ Jr. Drag Racing League as an 8-year-old. She won the 2010 NHRA Hot Rod Heritage Racing Series championship in the Nostalgia Funny Car class and has spent the last eight years advancing her way through Top Fuel. However, the native of Redlands, California, has not confined herself to the NHRA’s top class. Pruett has pulled double duty for a number of years by also competing fulltime in the NHRA Factory Stock Showdown, winning the 2018 title in her Dodge Challenger Drag Pak.

“It was very important to me to continue the close relationship I’ve had with Dodge//SRT and Mopar in this new journey with Tony Stewart Racing,” Pruett said. “I’m appreciative of the support that Dodge and Mopar, and all their fans, have shown me these past few years, and I’m proud to fly their colors as we move forward together and work to bring home wins and a championship in 2022.

“Having Direct Connection branding on my dragster this season is really exciting because it has such a rich history of success at the drag strip with racers like Don Garlits. It’s amazing to help continue to build on that legacy and introduce it to a new generation of Dodge enthusiasts.”

In addition to carrying on the legacy of drag racing innovator and multi-time champion Garlits, representing Direct Connection has personal meaning to Pruett.

“While Dodge//SRT was developing the new Drag Pak, we were also testing and developing some of the stage kits,” Pruett said. “It seemed almost unbelievable that an OEM would make available various stage kits capable of adding so much additional power, all while maintaining the car’s warranty. To be on the presenting side of a massive program that I contributed to while watching it progress in pure secrecy makes me incredibly proud to run Direct Connection and Power Brokers on my Top Fuel dragster.”

TSR will make its NHRA debut during the 2022 season opener Feb. 17-20 at Auto Club Raceway at Pomona. Those interested in partnering with TSR for its inaugural NHRA season can contact the team at TSRnitro@TonyStewart.com.

Fans can follow all the NHRA action this season at DodgeGarage, the one-stop portal for Dodge//SRT and Mopar drag-racing news. The site includes daily updates and access to an online racing HQ, news, events, galleries, available downloads and merchandise. For more information, visit www.DodgeGarage.com.

This year marks the 85th anniversary of Mopar. A simple combination of the words MOtor and PARts, Mopar offers exceptional service, parts and customer-care. Born in 1937 as the name of a line of antifreeze products, Mopar has evolved over nearly 85 years to represent both complete vehicle care and authentic performance for owners and enthusiasts worldwide. Mopar made its mark in the 1960s during the muscle-car era with performance parts to enhance speed and handling for both on-road and racing use. Later, Mopar expanded to include technical service and customer support, and today integrates service, parts and customer-care operations in order to enhance customer and dealer support worldwide. Complete information on Mopar is available at www.mopar.com. For more information regarding Stellantis (NYSE: STLA), please visit www.stellantis.com.

For more than 100 years, the Dodge brand has carried on the spirit of brothers John and Horace Dodge. Their influence continues today as Dodge shifts into high gear with muscle cars and SUVs that deliver unrivaled performance in each of the segments where they compete. Dodge drives forward as a pure performance brand, offering SRT versions of every model across the lineup. For the 2022 model year, Dodge delivers the drag-strip dominating 807-horsepower Dodge Challenger SRT Super Stock, the 797-horsepower Dodge Charger SRT Redeye, the most powerful and fastest mass-produced sedan in the world, and the Dodge Durango SRT 392, America’s fastest, most powerful and most capable three-row SUV. Combined, these three muscle cars make Dodge the industry’s most powerful brand, offering more horsepower than any other American brand across its entire lineup. In 2020, Dodge was named the “#1 Brand in Initial Quality,” making it the first domestic brand ever to rank No. 1 in the J.D. Power Initial Quality Study (IQS). In 2021, Dodge brand ranked No. 1 in the J.D. Power APEAL Study (mass market) – making it the only domestic brand ever to do so two years in a row. Dodge is part of the portfolio of brands offered by leading global automaker and mobility provider Stellantis. For more information regarding Stellantis (NYSE: STLA), please visit www.stellantis.com.