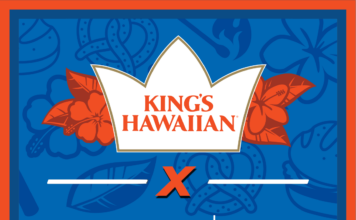 “We’re thrilled to announce this partnership with such a fun and reputable company,” said Steve Newmark, President of RFK Racing. “I think I speak for many across our sport and country that the King’s Hawaiian brand immediately brings to mind quality and great taste, and we can’t wait to promote their classic offerings and new products to our entire fanbase.”

King’s Hawaiian – known for its famous soft, and fluffy dinner rolls with just the right touch of sweetness – has partnered with RFK to get NASCAR fans excited about the launch of its newest products, Original Hawaiian Sweet Pretzel Slider Buns and Original Hawaiian Sweet Pretzel Hamburger Buns. The new products, which are the perfect balance of sweet and salty, and irresistibly soft and fluffy, join the existing King’s Hawaiian product portfolio featuring rolls, sliced bread, hamburger buns, hot dog buns, mini-subs and sliders.

“We are thrilled to partner with RFK Racing to announce the launch of our newest innovations, Pretzel Slider Buns and Pretzel Hamburger Buns, and introduce fans to a new weekly tradition, Slider Sunday with King’s Hawaiian,” said Samantha Guerreiro, Vice President of Marketing at King’s Hawaiian. “On Sundays, millions of fans across the country tune in to the sport with their friends and family – and we are inviting them to sweeten up their watch parties by serving up some sliders on King’s Hawaiian bread in celebration of Slider Sunday.”

Their debut with the No. 6 comes the weekend of May 15 at Kansas Speedway, the site of two of Keselowski’s 35 NASCAR Cup Series wins. Kansas is one of 11 tracks on the Cup circuit where Keselowski has multiple wins, and it stands as one of his top-performing tracks statistically with an 11.5 average finish. In addition to wins in 2011 and 2019, Keselowski has 13 top-10s overall at the 1.5-mile track in 24 starts.

King’s Hawaiian’s second primary race comes in the summer at Nashville Superspeedway, where last year the Cup Series visited for the first time in its history. It sits about 40 minutes outside of the Music City in Lebanon, Tennessee, and last season Keselowski finished 23rd at the 1.33-mile track.

The Kansas race is set for 3 p.m. ET on FS1 on Sunday, May 15, while the race at Nashville will air on NBC on Sunday, June 26 at 5 p.m. ET for the network’s debut at the halfway mark of the Cup schedule.

About King’s Hawaiian
Founded more than 70 years ago in Hilo, Hawaii, by Robert R. Taira, KING’S HAWAIIAN is a family-owned business that for three generations has been dedicated to providing irresistible, original recipe Hawaiian foods made with Aloha Spirit. A priority for the company is sharing the Hawaiian Way – a uniquely Hawaiian approach to hospitality based on graciousness, generosity, and a commitment to making everyone feel a part of the KING’S HAWAIIAN ‘ohana’ (extended family). KING’S HAWAIIAN makes the #1 branded dinner roll in the United States, along with other great Hawaiian foods including hamburger buns, hot dog buns, sandwich bread and more. The company operates baking facilities in Torrance, California, and Oakwood, Georgia. For more information, visit the company’s website at www.KingsHawaiian.com, or find KING’S HAWAIIAN on Facebook, Instagram and Twitter.

About Roush Fenway Keselowski Racing
RFK Racing, in its 35th season of competition in 2022, features an ownership lineup pairing one of the sport’s most iconic names, Jack Roush, along with NASCAR Champion, Brad Keselowski, and Fenway Sports Group owner John Henry. Roush initially founded the team in 1988 and it has since become one of the most successful racing operations in the world, propelling him to be the first NASCAR owner to amass three hundred wins and capturing eight championships, including back-to-back NASCAR Cup titles in 2003 and 2004. Keselowski, a former owner himself in the NASCAR Truck Series, joins the ownership fold while piloting the iconic No. 6 Ford, and brings to the team a championship mindset himself having won the 2012 NASCAR Cup Series Championship. In 2007, Roush partnered with Henry, who also owns Major League Baseball’s Boston Red Sox and English Premier League’s Liverpool F.C., to form Roush Fenway Racing. The Fenway group also added the NHL’s Pittsburgh Penguins to its portfolio in 2022. Off the track, RFK is a leader and proven winner in NASCAR marketing solutions, having produced multiple award-winning social media, digital content and experiential marketing campaigns. Visit rfkracing.com, and follow the team on all social platforms @rfkracing.