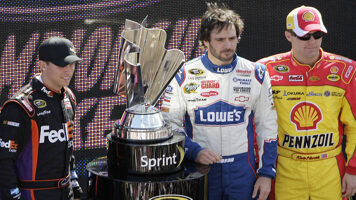 But my fifth title is one I’ll certainly remember, as well as one that others will find it hard to forget. Five championships is a lot, but I want to remain humble, as well as hungry. Therefore, when people ask me how many Cups I’ve won, I’ll simply say a ‘handful.’”

2. Denny Hamlin: Hamlin found trouble early at Homestead, making contact with Greg Biffle on lap 23 and sliding through the infield grass. With his splitter damaged, Hamlin was forced to make numerous pit stops for repairs, and never completely recovered. He finished 14th, and ended the season second in the points, 39 behind Jimmie Johnson.

“I wasn’t the only Joe Gibbs driver to slide through the infield grass,” Hamlin said, “and see his hopes go up in flames.

3. Kevin Harvick: Harvick appeared to have the race lead after pit stops during a lap 187 caution, but NASCAR officials nabbed him for speeding on the entry to pit road. He was sent to the back of the field, but quickly made his way back to the front. However, with Jimmie Johnson’s second-place finish, Harvick’s third was little to no consolation. Harvick ended the year third in the points, 41 out of first.

“I sent one Joe Gibbs driver and one Kasey Kahne crewman to the infield care center,” Harvick said, “and barely turned heads. Yet I’m penalized for exceeding a snail’s pace entering the pits. Sounds like I wasn’t the only one who got screwed.”

4. Carl Edwards: Edwards won the Ford 400 at Homestead, dominating with 190 laps lead on the way to his second straight win. He finished fourth in the Sprint Cup point standings, 229 behind Jimmie Johnson.

“That’s what I call ending the season on a high note,” Edwards said. “The high note, that is, of the fat lady singing, because as soon as I crossed the line, it was ‘over’ for everyone but Jimmie Johnson.

Now, I hesitate to call myself the favorite to challenge Johnson for next year’s Cup. That was the consensus in 2008, when I won nine races and was annointed the next Cup champion. I followed that with a winless 2009 with Aflac as my primary sponsor. Maybe the duck on the hood of my car explains the egg laying.”

5. Matt Kenseth: Kenseth finished ninth in the Ford 400, his 15th top-10 result of the year. He finished fifth in the point standings, 328 behind Jimmie Johnson.

“Congratulations to Johnson,” Kenseth said. “The ‘Drive For Five’ is complete. And for all those conspiracy theorists who think NASCAR favoritism helped Johnson to the Cup title, they’ll be saddened to know that Johnson’s quest in 2011 has unofficially been titled ‘The Fix For Six.’”

“I vowed at the beginning of the year that I would have an impact in the Chase,” Biffle said. “Well, Jimmie Johnson isn’t the only one who can say ‘mission accomplished.’”

7. Kyle Busch: Busch, seeking his second consecutive weekend sweep of winning all three series races, came up short at Homestead, crashing when Kevin Harvick bumped him into the wall on lap 243. Busch’s No. 18 M&M’s Toyota burst into flames, and Busch directed some heated words towards Harvick afterwards.

“Harvick is a reckless buffoon,” Busch said. “He’s a menace to notoriety. We all know M&M’s melt in your mouth, but it’s obvious he wanted to find out if Kyle Busch melts in the M&M’s car. I don’t. I just boil.”

8. Tony Stewart: Stewart scored his first top 10 since winning at California on October 10th with an eighth in the Ford 400. He improved two places in the points to seventh, and completes the season a distant 401 behind Johnson.

“Congratulations to Jimmie Johnson,” Stewart said. “He may deserve a hand, but he’ll probably need two to indicate Cup titles 6 through 10.”

9. Jeff Gordon: Gordon blew his engine on lap 199, ending a disappointing 2010 season with even more disappointment. He was winless this year, his second winless season in the last three, and tumbled three places in the points to ninth.

“Last week,” said Gordon, “my attack on Jeff Burton showed just one of the many ways I can ‘lose it.’ This week, I lost an engine, and another race. But, there’s a silver lining to Jimmie Johnson’s fifth Sprint Cup title. His championship allowed me to reach a milestone, as now I’ve become the only active four-time Cup champion. Thanks Jimmie!”

“I can certainly share in the disappointment that my teammate Kevin Harvick must be feeling,” said Bowyer. “NASCAR obviously has it out for Richard Childress Racing. First, I win in New Hampshire, and the next thing you know, my car has failed inspection. At Homestead, Harvick takes the lead, and boom! Here comes a penalty for speeding. Jimmie Johnson may not, but at least NASCAR recognizes us as a threat to his reign.”