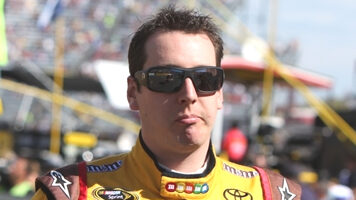 When Robin Pemberton uttered those four words last year in January, a lot of people were curious as to how the drivers would react. Most thought it would equal some emotions being shown, but at the end of the year, it went beyond just a little bit of emotion. [/media-credit]It was easily seen that Kyle Busch would be the poster boy for it, via some of his antics in the past. These antics have some fans not liking Busch for who he is.

A simple poll of the fans easily shows that one of the drivers that seems to be on everybody’s list is Kyle Busch. In asking a group of fans as to why, you quickly get the sense it has to do with attitude and actions like the above.

“He just gives off this vibe that he is better then everybody else and it’s all about him,” Evan Towle said. “Sort of like a young Tony Stewart used to be. Tony used to get on my nerves when he first started in NASCAR, but now he has matured and I like him.”

“I tend to agree with a lot of the way Kyle Busch acts,” Kyle Sedan said. “Sometimes it’s rather annoying.”

“Arrogant attitude, expects respect on the track but doesn’t give it back, whines about others when he is doing the same thing, fake,” one fan commented.

If you take his attitude out of the equation, then a lot of people seem to have respect for him.

“I am, personally, a Tony Stewart fan, but for Kyle, love him or hate him, he is a damn good driver,” Mike Hearty said. “Race wins don’t lie.”

“I do really like his support/involvement and commitment to short-track racing.” Sedan added.

A lot of people have been debating that he needs to change, which has come with mixed reactions.

Towle says, “We don’t need him, as the sport is doing fine without his babyish acts.”

In some ways, there are certain things that Busch has to become better at, such as some of the things that we saw this past weekend.

However overall, the sport needs somebody like Busch. His actions do spruce things up and add something different to the sport, and are needed to invoke discussion and rivalry. If everybody was the same cut, wouldn’t it get boring after a while?

As Mike Hearty and Kyle Sedan both say, it adds to the sport.

“I personally love Kyle’s attitude myself,” Hearty said. “NASCAR is entertainment and Kyle entertains in any way he can. Each sport needs a standout person the fans can have a choice to love or hate and he is the one. I do believe, though, when he matures more, his attitude will die down. I think he is young, a star and living in the moment right now.”

“People either ‘love him’ or ‘love to hate him’,” Sedan says. “So he most definitely adds to the sport, and it is good for it.”

This year was no exception as he added his own version of “Have at it Boys” to each of the divisions.

After teammate Denny Hamlin took the air off the back of Busch’s car during the Sprint All-Star Race, Busch wasn’t too pleased at all as he called Hamlin out on it.

“Somebody better keep me from Denny Hamlin after this race!” Busch yelled on the radio. “I had this race won. It was won.”

Busch then drove the car to the garage area, parking directly in front of Hamlin’s hauler. He went inside and waited till Hamlin got there, where they had a discussion with car owner Joe Gibbs in the middle.

“Kyle had a run to the outside and with me moving up and getting real tight, it then took some air away from the front of his car and he slid up into the wall. It’s tough for me,” Hamlin told Speed. “We talked about it and basically Kyle was just frustrated; he felt like he had a really good car. Me, I just came from the back with no practice and got back to the front where we needed to be and I felt like if I gave up the lead right there then I was going to give up the win.

“I don’t think Kyle would do anything different if he was in my situation. It’s just when you’re the leader, my feeling is that you’ve got the whole race track. If a guy is to the outside. then that’s when you need to hold your line.”

As the Nationwide race was getting closer to ending, Kyle Busch and Brad Keselowski were battling hard for the lead. After contact from Keselowski caused Busch to hit the wall, Busch drove back up to Keselowski’s bumper, spinning him.

“That’s Brad Keselowski. So I went down into the next corner and I dumped him. He does it to everybody else, why can’t I do it to him?”

Busch won the race while Keselowski ended up 14th.

“He did a good job, almost cleared me and took it for granted that I would lift to let him in line and I didn’t,” Keselowski said. “That’s his right. We’re going to go to work on beating him next week, and the week after and every other week.”

In his victory celebration, he changed it up by mocking somebody crying like a baby instead of his bow to go along with the reaction of the fans.

Early in the race, it was set in stone that it would come down to a battle between Todd Bodine and Kyle Busch. On lap 82 while battling for the lead, Busch took the air off of Bodine’s truck causing him to spin. Though this ended up helping Bodine as with the unscheduled pit stop and resulting strategy, he came out as the winner while Busch finished seventh.

“Our misfortune turned out to be a fortune,” Bodine said in victory lane. “I’d like to thank Kyle Busch for driving dirty, sucking me down and getting me spun out. That (stop) gave me enough gas. He doesn’t cut anybody a break. He drives that way in every division in every race.”

Upon hearing the comments, Busch interrupted Bodine’s victory celebration to display his displeasure.

“He (Busch) doesn’t have to drive like that to win; but he does,” Bodine said. “NASCAR won’t do anything about it. He was mad because I called him out on it.”

This confrontation at Kentucky promoted a long, hard battle for the Owner’s Championship between Germain Racing (Todd Bodine’s team) and Kyle Busch Motorsports.

Martinsville was no exception to their battle as they fought hard side-by-side, and at one point, Bodine was accused of trying to fool Busch on a restart.

“If they think I was trying to do a slow restart to fool Kyle Busch, they are wrong,” Bodine said on the radio at that time. “I just didn’t get a good restart. Message delivered—I’ll work on it.”

In the end, it was KBM coming out on top.

On Saturday, Busch finished second to Carl Edwards in the Nationwide Series race, though was unhappy about it as he thought Edwards jumped the start.

“Does it f—- matter?” Busch said afterwards. “Race is over, guy’s in Victory Lane.”

On Sunday, Busch stirred up controversy again, following repairs that he had to make on pit road after a wreck.

Under caution, Busch sped off pit road to try to beat the pace car and stay on the lead lap. He caught up, but NASCAR penalized him one lap for speeding.

Busch then went on a rant on the radio against NASCAR and showed the officials the middle finger on pit road, which incurred a penalty of two laps for driver misconduct.

“I’m the only one who will stand up to ’em, and they’re gonna show me how far I can stand up,” Busch said on the radio after the penalty. He then added that it was freedom of speech, going against the constitutional rights of everybody.

NASCAR penalized Busch $25,000 and putting him on probation until December 31st for “actions dentimental to the sport of stock car racing”.

“I accept NASCAR’s penalty and realize what I did during Sunday’s race at Texas was inappropriate.

“Even in my relatively short time here in NASCAR, it’s pretty obvious to everyone that I wear my emotions on my sleeve. Sometimes that passion has allowed me to find that little something extra I needed to win, and other times it’s made me cross the line. Sunday at Texas was one of those days.

“I lost my cool, plain and simple. It’s not acceptable, and I know that. I apologize to NASCAR, its fans, all the partners who support Joe Gibbs Racing, and all the people who work so hard to give me a race car that’s capable of winning races every week. All of those people deserve better from me, and I owe it to them to keep my emotions in check.”

Busch had other key incidents this year, including an argument with Jeff Burton. Though with them all, he just kept being himself and holding his part in the “Have at it Boys” policy.

During the next couple of weeks, I will reflect upon these incidents as we look back at what all broke loose in 2010.