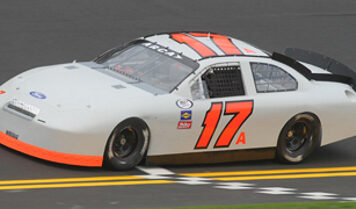 Eighteen-year old rookie Chris Buescher drove the Roulo Brothers Racing Ford, marked with an orange No. 17, to a lap of 49.315 seconds (182.5 mph) in the opening session to top the charts. [/media-credit]”It was a little unexpected, for sure, being the first session out on a speedway for me,” said Buescher, who has two wins in 15 ARCA Racing Series starts over two seasons. “To be honest, I’m not at all comfortable yet. I was a little bit all over the place, but that means I’ve got a good piece under me. We did a good job preparing.”

Buescher has experience in the ARCA Racing Series as he won both races at Toledo last year, however this marks his first full-season now that he has become of age.

Benny Chastain and Dakoda Armstrong rounded out the top five and Matt Lofton was sixth.