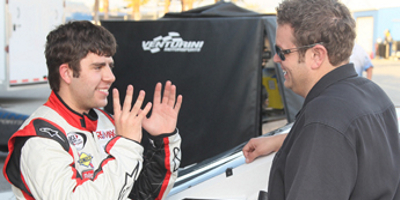 Kyle Fowler led the speed charts following day one and after the morning session day two, Fowler was still on top of the standings.

“I’m really pleased with (Kyle) Fowler in the 15,” general manager Billy Venturini said. “That’s been a real pleasant surprise. That car has been awfully good, and was really good in the wind tunnel. It’s good to see a kid that’s never been here before run that well.”

“Wow, we have fast cars! The PME engine we’re using, that’s a lot of horses under the hood,” Martin told the ARCA Racing Network. “The car is driving really well; we’re hugging the yellow line and slamming the nose to the ground into the corners. It’s driving really fast and flat into the turns. We’re going to continue with single-car lines this afternoon. I’m looking forward to it. It’s been a really solid day so far.”

“I’m really looking forward to hitting the track again at Daytona,” Martin said. “I had a bit of a head start on the field by being able to participate in the Hoosier Tire test here in December for Venturini Motorsports – so I feel I had a good chance to get somewhat acclimated to the track with some laps logged.”

Martin has made six career ARCA Racing Series starts, including one with Venturini. He finished 10th at Talladega last season.

“We’ve got strong talent among all of our drivers, and our reputation stands behind the equipment and support we’re able to provide each and every one of them,” Tom Venturini, a team representative said. “Hal has proven his talent for our organization in the past, as well as on the Gulf Coast Late Model tracks. We’re really excited to see how he’ll perform this season. He has tremendous talent. We’re hopeful he will not only add more top-10s to that resume, but also top-fives and maybe even a trip to Victory Lane.”

Along with Martin, Venturini Motorsports will run rookies Alastair Jackson, Max Gresham, and Darren Hagen in the 2011 season.

Richard Childress Racing development driver Tim George Jr. drove 11 laps to end up third on the charts with a lap of 48.985 seconds (183.73 mph).

“That’s the car we ran at Talladega, and it was really fast at Talladega,” George said after yesterday’s test. “I was comfortable with the car right out of the box; it’s not like getting used to a new car. I’ve been running the banking for the past four days here in the Rolex Series, and we were third on the board there, so it feels good to be back on top of the board with a different tire and a different car.”

For Dillon, it marked his first laps ever on a Superspeedway as he looks to run his first full ARCA racing season.

“It’s awesome,” Dillon said of the experience yesterday. “It’s really exciting. You go really fast. The track’s really smooth, so it’s fairly easy to get up to speed. We have a good car and there’s still some speed to gain. We’re just going to keep working on it. I just want to learn. I’ve got to learn to make our car better, and I’ve got to learn a lot, especially in the draft. We’ll just get as many laps as we can get and hopefully keep it up.”

Dillon’s teammate George Jr. said he looks forward to working with Dillon after having some years of ARCA experience under his belt.

“He’s been racing cars way longer than I have,” George said. “You know, he’s much younger than I am. I’m going to lean on him for some stuff and he’ll probably lean on me for some stuff on the road courses and maybe the superspeedways. There’s a lot that he’s done in his racing career that I’m looking forward to doing, including winning in the ARCA Racing Series. It’ll be good to have support between him and I, and I’m looking forward to it.”

“Well, we wanted to go out and make sure the thing runs real fast,” Kimmel said. “Unfortunately, it’s not running real fast right now. We’ve got some work to do. This is the car we tore up here last year in the race. We qualified 13th, and we expect to be there or in the top 10 by the time we’re done. We have some work to do right now.”

Drafting testing will take place this afternoon, beginning at 1 p.m. and lasting for four hours. A maximum of six cars per pack will be allowed to test.