Amanda Speed Is Keeping It All In Perspective 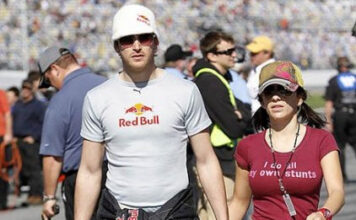 [/media-credit]In spite of the trauma of husband Scott losing his Cup ride with Red Bull Racing last season, Amanda Speed is keeping the couple’s spirits up, preparing to have their child, and coping with her mother-in-law’s cancer.

And even with those major highs and lows in their lives, Amanda Speed is working hard to keep it all in perspective.

“Well the day he got the fax from Red Bull was the same day we found out his mother had cancer,” Speed said. “So that put things into perspective real quick.”

“Scott and I have always been the type that love to enjoy life no matter what we are doing,” Speed continued. “So spending time with our family and friends is what is helping this process.”

Speed may have perspective but she is still understandably shaken by the seemingly abrupt firing of her husband in November 2010. The fact that the news was delivered to them via the fax machine was especially distressing.

“I was sick to my stomach honestly,” Speed said. “Especially with the way it was handled, I mean, a fax… Come on seriously.”

“You renew his contract halfway through the year, fit him for his 2011 firesuit in October and then a week after the last race of the year, you fire him through a fax,” Speed continued. “Just unbelievable.”

In response to being released from Red Bull Racing, the couple decided they needed to take action. Scott Speed filed a $6.5 million lawsuit against the race team, alleging breach of contract.

Amanda Speed admits that the filing of a lawsuit has not been easy for her husband or for her. She also noted that the experience has changed how they relate to people, particularly in the racing world.

“It is difficult that’s for sure, and I will be glad when it is over,” Speed said of the lawsuit. “But Scott would have never filed the suit if he was not 100% sure of it.”

“You can only take so much of being run over,” Speed continued. “In the long run I think it has made us both stronger, but also both very conscious of the people that we are around.”

“We have always been people who trust everyone until they break that trust,” Speed said. “However, now it is the opposite. You will now have to gain our trust. It is just really hard.”

Although the experience of the firing, the breaking of trust, and the lawsuit have been most difficult, the Speeds have some good news recently.

Scott Speed reached an agreement with Kevin Harvick, Inc. to run two Nationwide Series races, one at Iowa Speedway on August 6th and the other on the road course in Montreal on August 20th.

Amanda Speed is thankful for the new ride coming Scott’s way, especially since it will return the couple to the race track.

“It is so hard not being at the track each weekend,” Speed said. ” Before I met Scott I was working at the track, and I grew up at the drag races, so to not be at a racetrack at all is wearing on us both.”

“I hate watching the races on television,” Speed continued. “It is very hard.”

“The thing I miss most about being at the track is just the racing,” Speed said. “I live for that competiveness, heck we both do.”

The couple did take in the Daytona 500 this year and also plan to get to a few more races this season before Scott Speed gets behind the wheel of the KHI Nationwide car.

“We both went to Daytona,” Speed said. “It was very different, very emotional being at a racetrack and not racing, but we talked with a lot of people, so it was good to be there.”

The Speeds also recently announced their most special news, that they were expecting a baby together, due in September. The newest Speed will join big brother Rex, Amanda Speed’s child from a previous relationship.

“The pregnancy was actually a BIG surprise,” Speed said. “I mean, we had been trying, but we thought it wasn’t possible, so it was definitely a surprise.”

“We don’t know yet what we are having, but we will find out soon,” Speed continued. “Rex is very excited. He wants a girl and Scott wants a boy.”

“I just want it to be healthy, so it is going to be very entertaining when he/she gets here.”

Speed has also been very busy during this time with her marketing efforts, taking every opportunity to keep her husband’s name and his brand present in the racing marketplace.  She and Scott have also been active in the social media world, keeping up with fans via Facebook and Twitter.

“I do as much as I can on contacting media reps and people from different areas of racing,” Speed said. “I try to do what I can to keep him out there.”

“We have also got a guy redesigning his website, and other people that are out seeking sponsorship,” Speed continued. “We are all working very hard.”

“The fan support has been overwhelmingly good,” Speed said. “Scott is so grateful for that.”

“He has a great following on Twitter, and he is very glad to see his fans stick by him through this crazy period in his life,” Speed continued. “For all the haters, he will be glad to get back out on the track and say, “I told you so.”

In spite of it all, Amanda Speed acknowledged that there have been many life lessons in this whole process, some positive and some more difficult.

“I think there is always a life lesson in any step you go through in life,” Speed said. “The darkest moment through all of this was finding out Scott’s mom had cancer,” Speed said. “One minute she is as healthy as a horse, and the next minute, she is getting chemo and radiation.”

“It was just very devastating to us all,” Speed said. “It’s like, how did this happen so quickly?”

“Obviously finding out that I am expecting is very exciting and rewarding,” Speed said. “But I would have to say that the most triumphant moment has not come yet, but it will soon and we both can’t wait for that moment.”

SM Staff
Previous articleThe hot 20 over the past 10 – Junior is back, Junior is back!
Next articleTop Five Surprises Heading Into Bristol