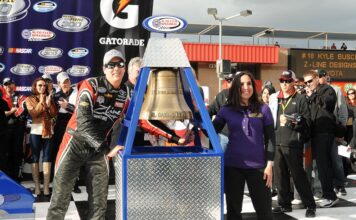 [/media-credit]SAN BERNARDINO COUNTY, Calif. (March 26, 2011) – A risky pit decision paid off for Kyle Busch and his No. 18 Z-Line Designs Toyota on Saturday during the Royal Purple 300 NASCAR NNS race at the Auto Club Speedway as Busch finished victorious by .713 seconds for the third consecutive race and fifth time in six starts.

Busch spoiled the day for pole-sitter Carl Edwards (No. 60 Roush Fenway Racing Ford) and Kevin Harvick (No. 33 Rheem Pool and Spa Heaters Chevrolet), who battled all day and led for a combined 112 of 150 laps of the race and finished second and third, respectively.

Both Edwards and Harvick elected to get four tires on their final stop with less than 20 laps left while Busch’s crew chief Jason Ratcliff insisted on just two tires giving him the extra margin he would need for the win.

“I thought that was a great way to win the race,” said Busch, who led for just 18 laps of the race. “I can’t thank Jason (Ratcliff) enough. He won the race today. We stole this one. It wasn’t ours. We were a third or fourth place car, fourth place definitely on the short run, good third place car on the long runs. The Z-Lines Designs Toyota Camry really came to life there late in the runs.”

Busch, who won at Bristol last week, survived a scare on the last lap as he bumped the wall coming out of Turn 2 but straightened out to take the checkered.

“I just got loose,” he said of that last-lap mishap. “I got up in the marbles too high in Turn 2. Got loose and that was it.”

Ratcliff said he couldn’t believe his strategy paid off in the end. “You think about things like that when you’re sitting on the couch and thinking if I was that guy I’d do this,” he said. “It was a good opportunity for us. We weren’t going to win it by taking four tires. I was really surprised to be the only ones to do the right sides like that. We had to wait and see what the 60 and 33 were going to do. It worked out. It’s fun to win one like that.”

“We focused on the wrong car, I guess,” Edwards said. “We were focused on the 33 and my crew chief said the 18 is the leader and I thought, ‘Oh he hadn’t pitted yet.’ But he had pitted and took two tires. He was really in the best position being back there watching what we were going to do and then doing the opposite. It didn’t work out the way we thought it was going to. It was pretty fun racing out there today.”

Joe Gibbs Racing has now won seven consecutive races at Auto Club Speedway – five by Busch, one each by Tony Stewart and Joey Logano. This is most consecutive wins by a Nationwide Series owner at a currently scheduled track.