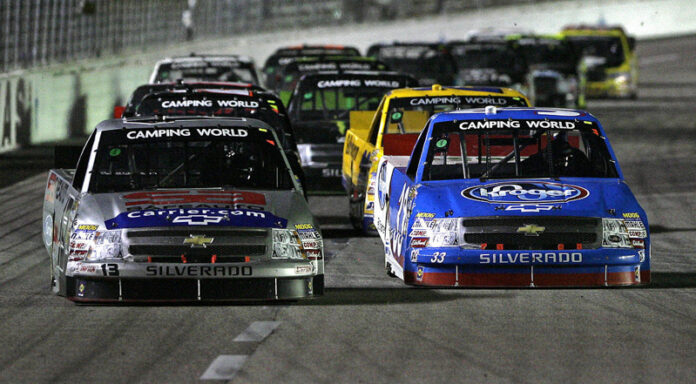 In a race that had a record number of leaders and lead changes, it was Ron Hornaday winning the WinStar World Casino 400k after a controversial call on the last lap. [/media-credit]On the final green white checkered finish, Johnny Sauter had the lead and chose to start on the outside. Before crossing the start finish line, Sauter came down in front of Hornaday, which is a no-no as according to the NASCAR rulebook. Rules states clearly that you must stay in your lane until you cross the line. As a result, Sauter was black flagged, handing the win over to Hornaday.

“I’m not going to go down that way and judge,” he said. “I saw him sliding down and once he figured it out, he went back up there. I kind of saved my stuff just in case that happened there. It’s just an unbelievable day. I’ll take it.”

The win marks the 48th career win for Hornaday and his third win at Texas Motor Speedway.

“The way our year has been going, we’re gaining on them, but we’re still not right yet,” he added. “These guys never lay back. Thanks to Kevin and Delana for believing in me.”

Sauter, meanwhile, was credited with a 22nd place finish as the last truck on the lead lap.

“He’s got a lane to race down there,” Sauter said of NASCAR’s call. “We both spun the tires. I was just trying to save the truck.”

“I just wanna thank these guys right here,” Kligermann said. “We don’t go to the wind tunnel; we don’t do shake-rig testing. They gave me an awesome truck and its about making the best of these opportunities. I owe to them since Phoenix and to know that we’re one spot away from right there (victory lane), is good.”

David Mayhew also scored his best career finish in five starts as he finished third in his first start with Kevin Harvick Incorporated.

“We had a really good truck,” Mayhew said. “I gotta thank Kevin and Delana Harvick and all these guys at KHI. Without this opportunity, you won’t be able to run like guys like that. Those guys made awesome adjustments on pit road and kept working on it.”

For Brian Ickler, he was able to rebound to finish fourth after spinning out on lap 50 after contact with Todd Bodine.

“We had a good truck all weekend,” Ickler said. “Bodine and I got into it in there and we spun out but we came back up there. I gotta thank Kyle and Samantha for the opportunity. I get to this one more time at Iowa and can’t wait.”

Buescher started the race from the pole, though on lap four, Austin Dillon took the lead before the first caution for oil on the track at lap five. The restart would come at lap 10 and Buescher would jump back to first, till lap 15 when Dillon grabbed it back.

The second caution came out on lap 23 for Chase Mattiolli going for a spin and all the leaders pitted with Steve Arpin, who was making his first ever Camping World Truck Series start, coming off pit road first. The restart came at lap 27 and by lap 31, Dillon was already back in the lead.

The third caution came out at lap 51 for Brian Ickler spinning and the leaders would pit again, though Dillon would hold serve. The restart came at lap 56, though another caution would come out at lap 59 for Ryan Sieg spinning. The restart would come at lap 63 and on lap 64, Johnny Sauter jumped into the lead.

The fifth caution came out at lap 66 for David Starr and Todd Bodine making contact.

“I shouldn’t had been back there racing them,” Bodine said. “I could’ve stayed behind him or went under and I chose the wrong one of the two.”

Some of the lead trucks pitted while nine didn’t, which handed the lead to Nelson Piquet Jr. when the restart came at lap 72. He was able to hold the lead till lap 75 when Miguel Paludo would take over the top spot, till he got passed by Joey Coulter at lap 83.

The sixth caution would come at lap 90 when Austin Dillon and Matt Crafton made contact as Crafton tried to slide up in front of Dillon, thinking he was clear.

“I guess he just got a run there the last second,” Crafton said. “He wasn’t there, he wasn’t there and then he was there and I tried to back off and tried to turn left, but couldn’t cause I was free and then I got hooked on the front straightaway. Kind of a hard way to go down.”

Once again, some drivers pitted while others stayed out, which handed the lead over to Ron Hornaday for the lap 95 restart, though he’d only hold it till lap 100 when Sauter would once again take it over.

The seventh caution would come out when Cole Whitt would blow up and everybody pitted, except Ryan Sieg who stayed out. The restart came with 55 to go and the race would only stay green for five laps as the eighth caution would fly when Justin Marks would go for a spin. Sieg pitted under the caution, giving the lead back to Hornaday. The restart came with 45 to go and with 37 to go, Sauter would go back to the front.

The ninth caution came out with 30 to go with Steve Arpin would get loose, making contact with Austin Dillon, sending them both into the grass. The restart came five laps later and Sauter would lead all the way to the final caution with seven to go when Clay Rogers got into the wall.

The race would go back to green with the green-white-checkered, which is where the call was made against Sauter. On the final lap, Travis Kvapil and Johanna Long made heavy contact with the wall as Kvapil got loose coming off of turn four.

Sauter now leads Whitt in the point standings by 12 points as they’re followed by Dillon, Crafton and Timothy Peters.

The next race for the Camping World Truck Series is on Thursday July 7th at Kentucky Speedway.