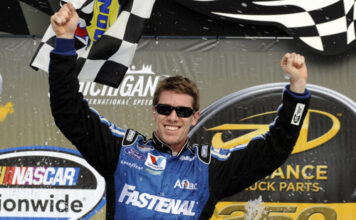 [/media-credit]“Ricky Stenhouse is a driving machine and here comes Jack Roush. Jack got us some fuel miles and we couldn’t dare run out of fuel with that Ford Focus out front in the pace car, it is all about fuel mileage today. Jack leaned her down and we didn’t need it, it was great. Mike Beam did a great job with the strategy. I didn’t think I was going to get by Ricky. I cannot drive any harder than that. That was as hard as I could drive to get by him. He is going to be a force to be reckoned with.” Edwards said.

“Our Tender Ridge Mustang was really fast for about 15 laps and then we got really tight. On that last restart I just tried to get as far out there as we could and didn’t quite get far enough. We just got too tight. Carl caught us. It was a good day for us. We definitely wanted one more spot. I gave it everything it had, we just got too tight.” Stenhouse Jr. said.

With his second place finish, Stenhouse Jr. took over the series point standings by two over Elliott Sadler.

“I guess that is a good thing for us for sure for the championship but it doesn’t do anything for us not winning. I feel like earlier in the year we gave some wins away, definitely some top-fives. We are right there where we need to be we just have to cap it off.” Stenhouse Jr. said.