Surprising and Not Surprising: Infineon Toyota Save Mart 350 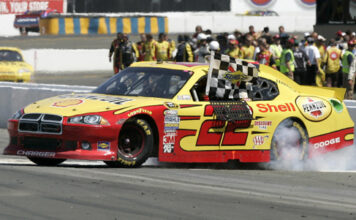 In a weekend filled with Merlot, Chardonnay and Pinot Noir in the California wine country, here is what was surprising and not surprising from the 23rd annual Toyota/Save Mart 350 Sprint Cup Series race at Infineon Raceway. [/media-credit]Surprising: Not known for his road racing prowess, the driver of the No. 22 Shell/Pennzoil Dodge finally notched a road course victory. Kurt Busch did so in dominating fashion, taking the checkered flag and quickly resorting to his backwards victory lap around Infineon Raceway.

This was Busch’s 23rd Cup win, tying Ricky Rudd for 23rd on the all-time victory list. This was also Busch’s first win since his Coca Cola 600 victory in 2010, breaking a 38 race winless streak.

“It was an unbelievable set up,” Busch said. “Once we got into the groove with this car, it seemed to get better and better. My cars have never done that before.”

“That was an awesome handling Dodge,” Busch continued. “After what we’ve been through, we’ve been on a high these last few weeks.”

Not Surprising:  Road courses often lead to road rages and Sonoma did not fail to deliver. Most drivers were mad at somebody, from Denny Hamlin being ticked at AJ Allmendinger , Joey Logano plowing through Robby Gordon, and Juan Pablo Montoya punting Kasey Kahne, as well as getting into it with Brad Keselowski.

But the ‘most mad in wine country’ award goes to Brian Vickers, driving the No. 83 Red Bull Toyota, and Tony Stewart, behind the wheel of the No. 14 Office Depot/Mobil 1 Chevrolet. The trouble between the two started early in the race when Smoke leaned on Vickers so hard that he got turned, setting off a major melee.

Vickers, however, bided his time until late in the race and paid back Stewart in a major way. In fact, Vickers paid Stewart back so dramatically that the latter came to rest with his rear end elevated on one of the tire barriers, causing Stewart’s first ever DNF on a road course.

“I probably had it coming because I dumped him earlier,” Stewart said of his altercation with Vickers. “It was payback but I dumped him first because he was blocking.”

“I like Brian but I was complaining about how he’s been racing all year,” Smoke continued. “I don’t care if he was Ryan Newman, I would have dumped him too.”

“I’m not going to tolerate it,” Stewart said. “They block, they get dumped.”

“I don’t know why he did it,” Vickers said, explaining his side of the altercation. “I was trying to avoid the 18 (Kyle Busch) and Tony was the least of my concern.”

“He sowed his oats and he reaped them,” Vickers continued. “Stuff happens.”

Surprising:  Instead of flitting hither and yon, Carl Edwards surprisingly proved his total focus on the championship by not only forgoing running in the Nationwide race this weekend but by also slugging his way to a third place finish.

“We were lucky,” Edwards said. “Everything went our way today.”

“I stayed here for practice,” Edwards continued. “And it all came together for a third place finish, which is great for our points.”

Edwards, this week piloting the No. 99 Scotts Ortho Ford, posted his third top-10 finish in seven races at Infineon. He also maintained his lead in the Chase standings, now 25 points over second place Kevin Harvick.

Not Surprising:  In a weekend marked by coming home, celebrating his daughter’s birthday and premiering his appearance as ‘Jeff Gorvette’ in the Cars 2 movie, it was not surprising to see four-time champion Jeff Gordon finish in the runner up position at one of his most loved race tracks.

“It was a struggle,” Gordon admitted. “We really missed the set up at the beginning of this race.”

“Our car was fast at the end and that felt awesome,” Gordon continued. “To work our way up to second, man, that was amazing.”

Surprising: For one driver who absolutely abhors road course races, deeming Sonoma “one of my worst tracks,” the race actually did not turn out so badly. Matt Kenseth, behind the wheel of the No. 17 Crown Royal Ford, finished in the top-15.

Kenseth and his crew chief Jimmy Fennig brought a brand new car to Sonoma, having shaken it down last month at Road America. Kenseth definitely bettered his average finishing position of 22.2 at Sonoma in the past.

Not Surprising: Unfortunately for Junior nation, their favorite but self-admitted road course hater, Dale Earnhardt, Jr., had reason to continue his bad attitude. The driver of the No. 88 scored his second DNF since October 2009, officially finishing 41st.

“We was just out there running around and we got part of it,” Junior said, referencing the altercation between Tony Stewart and Brian Vickers on Lap 38. “It banged up the nose and knocked a hole in the radiator.”

Junior’s engine did indeed expire from the hole in the radiator, which drained the water and caused the engine to blow. Junior also fell from third to seventh in points as a result of his Sonoma woes.

Surprising: One of the Cup drivers not often mentioned in the front of the pack was surprisingly a factor in the latter stages of the Toyota/Save Mart 350. David Gilliland, driver of the No. 34 Taco Bell Ford finished 12th.

“I am really proud of our team today,” Gilliland said. “We had an issue with second gear toward the end of the race there, so we lost a few spots, but I had a lot of fun running up front all day.”

“I asked the guys on the radio during the race if there was an award for passing the most cars ‘cause, man, it sure seemed like I was passing cars all day,” Gilliland continued. “It was a great day for our team.”

Not Surprising: After the gaffe heard round the racing world last year at Infineon when Marcos Ambrose shut off his engine and lost the lead, the driver of the No. 9 Stanley Ford Fusion redeemed himself, finishing fifth.

“I am so proud of my Stanley car and my Stanley team to get a top five out of what could have been a very tough day for me,” Ambrose said. “I want to thank Stanley for putting me in the car and believing in me.”

SM Staff
Previous articleThe Final Word – Kurt Busch and other boys who have spent time in the dog house
Next articleLooking in the Rear View Mirror: Road Course Racing