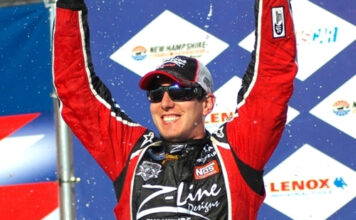 Kyle Busch not only won the New England 200 at New Hampshire Motor Speedway, but he also tied Mark Martin as the record holder for Nationwide wins at 49. And for good measure, Busch became just the third driver to score 100 NASCAR national series victories. [/media-credit]The 26 year old driver from Las Vegas, Nevada has won 22 times in the NASCAR Sprint Cup Series, 49 in the NASCAR Nationwide Series, and 29 in the NASCAR Camping World Truck Series. Busch is now third in the ranking of NASCAR National Series wins, behind Richard Petty, with 200, and David Person with 106.

Busch has won at 25 different tracks, including achieving an historic first three-race weekend sweep at Bristol. He is ranked 28th with Terry Labonte in NASCAR Sprint Cup victories.

“It certainly feels good and it means a lot,” Busch said. “To come out here and win for Z-Line Designs and get the 49th win in their car, we couldn’t do it without their support.”

“To tie Mark Martin’s win is pretty awesome as well.”

Speaking of Mark Martin, he was one of the first to find Busch in Victory Lane and congratulate him.

“It’s just incredible,” Martin said of Busch tying his record. “Everybody forgets that he’s 26 years old. There’s so many more out there for him.”

Busch had to do battle with his nemesis and probation partner Kevin Harvick, behind the wheel of the No. 33 Rheem Heating, Cooling and Water Heating Chevrolet, at the end of the race. Harvick finished in the runner up position and attributed his not winning the race to being warned by NASCAR.

“I was told a few weeks ago that if we touched the 18 car, we’d be parked,” Harvick said. “I just had to be really careful and that’s just the way NASCAR put it to me.”

“It would have been a lot easier to win if you didn’t have handcuffs put on you.”

Even though Harvick did not win the race, he, like Busch, achieved his own record when the checkered flag flew. Harvick scored his 199th top-10 finish, which is an all-time record in the Nationwide Series.

“We’ve been fortunate to have a lot of fun in this Series since it first started,” Harvick said. “I just came up one short.”

“We were a seventh or eighth place car,” Kahne said. “My car was bouncing pretty bad throughout the race. But we were able to miss some of those wrecks and got up to third.”

“It ended up being a pretty good result.”

After spinning on Lap 33, Ricky Stenhouse Jr. recovered to come in fourth. The driver of the No. 6 Fenway Park 100 Years Ford admitted to having a pretty good run after his early error.

“I made a mistake there early trying to get by the 31,” Stenhouse, Jr. said. “He was holding everybody up and I tried to push the issue too hard.”

“We got in there and got too tight and spun the car around there,” Stenhouse, Jr. continued. “This Red Sox Fenway Park 100 Year’s edition is a cool looking car and I wish we could have gotten it into victory lane.”

Aric Almirola, behind the wheel of No. 88 Grand Touring Vodka Chevrolet, rounded out the top five.

“We were a top ten car off the truck so to come out with a top five has been good,” Almirola said. “Everybody at JR Motorsports has been working their guts out.”

“So, it’s fun to come and have a good weekend and put it all together and show off some of the hard work the guys have been doing back at the shop.”

There was plenty of action throughout the race, from Carl Edwards blowing an engine and returning to his seat in the broadcast booth to several on-track altercations involving Rusty Wallace’s son and driver Steve Wallace.

The driver of the No. 60 Fastenal Ford Mustang blamed a broken value or broken valve spring on his falling out of the race.

“Something just broke,” Edwards said. “You don’t really know until you get it apart but I did shut it off early so we should be able to troubleshoot and look at it to see what was actually broken.”

Steve Wallace, driver of the No. 66 5-Hour Energy Toyota Camry, also had an eventful race, but in a different way than Edwards. He was at the heart of several racing incidents and eventually spun out and wrecked at the end.

“I really like Jason Leffler a lot – I get along with him really, really well,” Wallace said of one of his altercations. “He hit me about five or six different times today and he cut up in front of me and spun himself out.”

“It’s as simple as that,” Wallace continued. “Got in the back of the 20 (Joey Logano) there and just a lot of things happened today – some were my fault and some were not.”

Joey Logano, one of those who was caught up with Wallace in one of the incidents, had his own take on the on-track tussle.

“The 66 (Steve Wallace) just drove in there a little too high and got us,” Logano said. “That was the end of our day.

Mary Jo Buchanan
Mary Jo has lived and breathed racing since her days at local dirt tracks. From her vantage in the pits, she has developed an interest and expertise in all levels of racing, from go karts to the Cup Series. Many of her articles focus on the "behind the scenes" racing world, as well as up and coming drivers. Mary Jo enjoys writing about the people that make NASCAR and racing work on a day-to-day basis. She recently won an NMPA award for spot news writing. Mary Jo can also be followed on Facebook and Twitter.
Previous articleKyle Busch Reaches NASCAR National Series Victory No. 100
Next articleCrafton nudges Dillon for second career win

The driver of the No. 11 Joe Gibbs Racing Toyota Camry was awarded the top starting spot for the upcoming Cup event in Miami.
Read more
Featured Section 2

As we anticipate another exciting season in NASCAR, here is your guide to partnerships continued and new alliances formed in preparation for the 2021 season. This list will be updated as new information becomes available.
Read more
XFINITY Series

The 18-year-old grandson of NASCAR Hall of Famer and team owner Joe Gibbs will return for an additional 14 Xfinity Series races throughout the 2021 season.
Read more