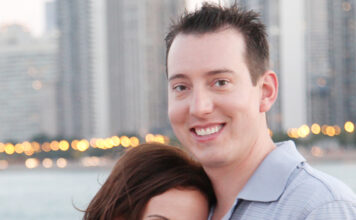 This past weekend, Kyle Busch achieved a milestone, securing 100 wins in all three major series of NASCAR. And beside him every step of the way has been his wife Samantha, who brings her own unique style to their relationship and to the sport. [/media-credit]The couple tied the knot on New Year’s Eve in a unique, fairy-tale wedding that she designed. Busch definitely brought her own style to that event, from her designer dress to a feather-studded reception.

“It was an awesome day,” Busch said. “All the team guys and my family, which is gigantic, were all there.”

“The two best moments were when I was getting ready and I finally got my dress on and my dad came in,” Busch continued. “My dad burst into tears, I started crying and the girls started crying. The makeup lady was yelling at us all to stop crying.”

“Then when we got to Holy Name and they opened these two big doors and the aisle was forever long and I just saw Kyle at the very end of it and then I’m crying all over again,” Busch said. “Before the wedding he told me that he doesn’t cry about anything but I see him tearing up so me and my dad started crying again.”

“Everybody was crying but it was great.”

In addition to the nuptials, Busch also brings her own unique style to her career. After many semesters of hard work, she will finish her degree in industrial organizational psychology, which she has also managed to blend with racing.

“The school year starts in August,” Busch said. “I have two classes and I’m done after that finally.”

“What’s nice about it is with KBM (Kyle Busch Motorsports), I get to apply it all,” Busch continued. “And Joe Gibbs Racing is letting me do my thesis on them.”

While Busch’s career in psychology is unique enough, she has also recently taken on a new endeavor. She is uniquely marrying fashion with her world of racing.

“Our retail store has been very successful this year,” Busch said. “Chase Authentics called and I have three pieces for an exclusive for a Kyle women’s line.”

“One’s a very cute hoodie, one is a three-quarter length hem length, and the other is a double-layer tank top,” Busch continued. “The tank top is white and black and then I did this silver foil that says ‘Kyle Busch’ and ‘18’.”

“My hope is that one day they let me do a whole women’s line.”

“I know that some of the guys that follow me on Twitter don’t love it but I try to keep a good balance during the race,” Busch continued. “But even some of the guys now will ask questions for their wives.”

“But I love it,” Busch said. “I’ve helped girls get ready for prom via Twitter, or concerts, first days or weddings.”

“There are a lot of women who are into racing but they are also into fashion so it kind of works,” Busch said. “It’s taken off into its own thing.”

One of the other most unique aspects about both Samantha and Kyle Busch is their dedication to the Kyle Busch Foundation. In addition to the five children’s homes that the Foundation supports, Busch has high hopes for expansion and outreach to individual children and families.

“Right now we have five children’s homes and we donate books, clothes and at Christmas we give more of a monetary gift,” Busch said. “We get hundreds of thousands of requests and we want to help.”

“So, we’re trying to raise enough money so we can pick several families to help,” Busch continued. “The homes are our first priority but even if we can help a couple of families, that’s how we’re trying to become broader.”

“The fans have been great this year,” Busch said. “There’s this thing called ‘Lexie’s Challenge’ where this young girl buys a gift card every time Kyle wins.”

“So, the fans have joined in and every time we win, we get all these gift cards and we divide them up for our homes.”

In addition to the Foundation work, both Samantha and Kyle Busch have a unique appreciation for their fans. And they both try every chance they can to connect with them, including meet and greets at local home tracks throughout the country.

Kyle Busch, in fact, went from Victory Lane at the inaugural race at Kentucky Speedway to the Slinger Nationals, where again he captured the checkered flag, much to the delight of the many fans who wanted to celebrate with them both.

“He won Slinger and there were 300 people outside his hauler,” Samantha Busch said. “So, I stood outside the hauler and got everybody into line.”

“There were so many kids in the back and I didn’t want to see them get left out,” Busch continued. “So Kyle stayed and we got through 300 plus people in an hour. It was really good.”

“There were so many kids running around saying “I met Kyle Busch.”

Given the wins, the milestones achieved, as well as the challenges that season has brought, from Kyle’s speeding ticket to the dust up with competitor Kevin Harvick and team owner Richard Childress, it is small wonder that one of the other unique aspects of Samantha Busch is the perspective she brings to those ups and the downs.

“It’s definitely been a challenging year,” Busch admits. “There have been things that have happened.”

“But I’m always here for him and he’s here for me and we always say no matter what’s going on, we always have each others’ backs,” Busch said. “And we don’t let it affect him on the race track.”

“When he puts his helmet on, he’s so focused so that’s been great,” Busch continued. “We’re just going about being us and keeping our family and friends close. It only makes you stronger, right?”

While many other drivers and their families struggle with being in the spotlight, especially during challenging times, both Samantha and Kyle Busch take the unique approach of being out there in the public eye.

“For us, our wedding was televised so we’re pretty open,” Busch said. “We have enough going on that we don’t worry about how others handle their business. We focus on ourselves.”

“It’s so funny because every weekend, we’re at the track but when we’re not, we’re at KBM,” Busch said. “When you have the Truck team and the Foundation and the retail and the late model races, there really isn’t any time to focus on anyone else’s issues.”

One thing that makes Kyle and Samantha Busch unique, at least at present in the NASCAR garage, is that they have two adorable dogs but no children yet. And as far as Busch is concerned, that is “down the road”, although she does admit it would be especially nice to have a daughter with whom to bake and shop.

“That’s down the line,” Busch said. “My parents are moving to North Carolina in two years so that will be a good timing. It’s in the plans, but in the distant plans.”

Samantha Busch is not, however, unique in a very important way. She, like so many other drivers and their wives, are superstitious, not even daring to think about championship possibilities.

“It makes me so nervous,” Busch said. “It’s a forbidden topic.”

“When I was home, there were all these dress stores and my mom asked me if I wanted to even look for a dress, but I told her, ‘Don’t say that, we’re not in the Chase. I can’t even look for dresses.’

“You never know,” Busch continued. “I won’t even look at dresses. I won’t look until it’s all over.”

So, what makes Samantha Busch most unique?

“I am an individual,” Busch said. “And there are not many people that bring shoes to racing!”

“Some people who didn’t know me before ask if this is the way I am,” Busch continued. “But my friends who’ve know me forever say that’s just how I am.”