IndyCar Wants to Return to Mexico in 2013 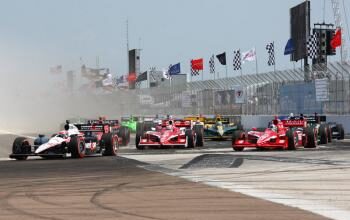 by Luis Ramírez at La Aficion

The president of IndyCar’s commercial division, Terry Angstadt, revealed to La Aficion that they would like to have a race at the Hermanos Rodriguez track and a Mexican driver in the series. [/media-credit]Mexico not only has awaken interest in Formula One to have a race in the medium term, but also the IndyCar Series who is working to bring its show to the Autodromo Hermanos Rodriguez in Mexico City in two years.

In this way they are looking to integrate into the Hispanic market through a project that also includes the arrival of a Mexican driver into the grid of the series as an additional element so the event has more appeal to the local fans.

Terry Angstadt, president of the Commercial Division of the American open wheel series, explained to La Aficion that they’ve started conversations that will eventually bring drivers like the Brazilians Helio Castroneves and Tony Kannan, and the Americans Marco Andretti, Danica Patrick, among others, to the race track in Mexico City.

“I was in Mexico City approximately four weeks ago, and I have been there before in the last three years.  We are in conversations with strong companies to be able to return to the city and go to the Autodromo Hermanos Rodriguez”, revealed the series executive in an exclusive interview for La Aficion.

The visit however has not been the only one in 2011 by the commercial director of the series.  Sources close to the negotiations pointed out that they’ve had at least three more meetings this year in Mexico City to advance the project.

With the arrival of new chassis and engines for 2012, which will represent a revolution for the series, IndyCar does not wish to limit its markets to the USA, Canada and Brazil, and because of that Mexico is an obvious choice for an event: “I think that everything points to 2013.  I don’t think the negotiations will allow us to do it by 2012, but it’s still too early to decide.”

Terry Angstadt also mentioned that they had not lost interest in Mexico, however there were needs that had to be taken care of before: “We’ve always had interest but lets not forget that this is a business.  We need a motivated promoter, someone on the other side of the table that sees the potential of an IndyCar event, I see the potential, but we need that on the other side and it is something we are working on.

The plan of a Mexican driver

On the list of regular drivers on the IndyCar series only three are Spanish speaking: the Spaniard Oriol Servia, the Venezuelan E.J. Viso and the Colombian Sebastian Saavedra, however the last report given by the US Census Bureau says that the majority of the Hispanic population, which has grown to 50.5 million, are of Mexican decent.

“In my opinion, this is a great opportunity to enter into the Latin market, I think it’s the best.  We are in talks to have a Mexican driver, a successful driver, and we are working very hard so he can be in the series.  I think we need a Mexican driver”, pointed out the commercial director.

The locals Memo Rojas (Champion of the Grand Am Series with Ganassi) and David Martinez have shown interest in reaching IndyCar and both are working in projects to be able to make that happen.

Angstadt explained that what’s important at the moment is to help the competitors find sponsors and be able to join the series:

“We don’t have to worry about the talent of the drivers, because they have it, we simply need to focus on the commercial side”, he said.

For him, having a race in mexico city requires an necessary element to attract t the attention of the public: “I think that the combination of the race wit ha drivers is necessary and would be the best way of doing things”.