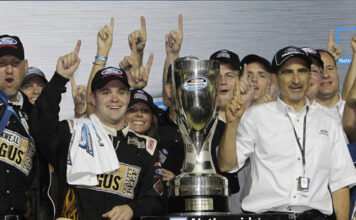 Brad Keselowski held off Ricky Stenhouse Jr. and Carl Edwards on the final laps at Homestead-Miami Speedway to capture his fifth win of the season and the 17th of his NASCAR Nationwide Series (NNS) career. [/media-credit]“You couldn’t ask for a better way to end the season. Not being able to win the championship, it’s good to be able to finish on a high note, winning the pole and the race today at Homestead. It’s a great exclamation point to the season for the whole Discount Tire Dodge team.” Keselowski said.

“The Blackwell Angus Beef and Cargill Mustang did its job at Ford Championship Weekend – Nationwide Insurance – this is a dream come true.” Stenhouse Jr. said.

“My family sacrificed everything they had. My sister didn’t quite get everything that she’s ever wanted. We were racing as much as we could and to do that for them, he taught me hard work and to never give up. I wish my granddad was here. He helped us out a lot through the go-kart days and worked on our cars. We had a lot of fun doing that. I wish he was here, but this is an awesome night.” Stenhouse Jr. said.

Stenhouse Jr. and Edwards celebrated by parking nose to nose on the frontstretch and doing a duel burnout.

“First, congratulations to Ricky and all the Blackwell Angus Beef folks. Ricky has come so far and I think he’s gonna be a champion in a bunch of levels of this sport. That was huge and my guys have done a great job all year.  Eight wins and we’re so proud to have Fastenal on board.” Edwards said. “Ford has been great. It’s Ford Championship Weekend and we wrapped up the drivers and the owners and that was huge. Valvoline and NextGen, Wiley X and all these fans that are here, this is cool. It did get pretty exciting there at the end. I had to remember, ‘Hey, don’t screw this up,’ and Brad started blocking a little bit and I thought, ‘Well, if he’s gonna block, I’m gonna bump him,’ and then I bumped him and it helped him and hurt me.”

Jack Roush is looking to become the first owner in NASCAR history to win both the Sprint Cup and Nationwide Series championships in the same season.