Kruseman cruises to 7th Friday Victory at the Chili Bowl 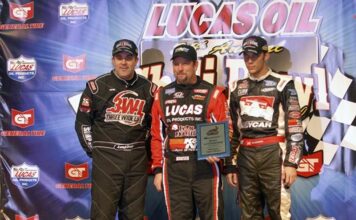 [/media-credit]The final day of qualifying for the Chili Bowl went off with very few hitches but one very scary crash. Half way through the 4th qualifying race Joey Moughan’s Black 77 clipped the berm and slid on its side into bale of hay. He was then was launched up into the catch fence where it became tangled in the fence. The right rear wheel was over the top the fence and the car was held in the fence by the right front tire and wheel upside down. After working for several minutes, track safety workers were able to extricate Moughan from the car. He was awake and alert and able to follow commands. He was transported along with family to an area hospital where at last word he was undergoing a precautionary CAT scan.

The racing tonight was fierce. Perhaps more so than any other night of the event so far. With big name drivers like Joey Saldana, Bryan Clauson, Jac Haudenschild, Levi Jones, Cory Kruseman and Brad Loyete all competing for a locked in position in the Chili Bowl A-main.

Winning his 7th Friday night A main and securing a spot was Cory Kruseman. He ran strong, clean fast races. He was smart and strong with his passes using caution when in traffic and doing what he had to do to win.

The “Wild Child” Jac Haudenschild was the surprise of the night. Wheeling his way into the A main with the flair and flamboyance we have come to expect from Jac. Always the showman his skills were sharp and his car control precise. Starting from the back of the A main he worked his way almost into transfer position finishing just one position shy in 4th.

The two stand outs of the night were without a doubt, Levi Jones and Bryan Clauson. Clauson who announced he will be participating in the rookie orientation for the Indy 500 and attempting to qualify for that race this year came home a strong 3rd after falling back after nearly stalling the car  in traffic.

Levi Jones, who is driving for Shane Hmiel in the Chili Bowl, showed strength and skill sets that were stronger than his 27 years should have allowed him. He flat out gutted Clauson going 3 wide to take over 2nd in the A main and nearly over took Kruseman at the checkered flag coming out of 4 when Kruseman struggled to get through lapped traffic. Finishing a very strong and charging 2nd Levi will no doubt make his presence known on Saturday night.

Joey Saldana  finished third in his qualifying race to make the A main. He was never a factor after starting deep in the field and becoming mired in traffic and slower cars. But it was his skills behind the wheel that made an otherwise unsuccessful race a site to see. Saldana used his ability to control the car in tight traffic and control a car that was bicycling or teetering on two wheels as it goes around the corner to maintain a respectable finish of 15th, considering he himself said, “I don’t know anything about a midget. I really don’t know a whole lot about what I am doing out there so I am not sure that I am giving my crew enough information to help me. But we are having a good time anyway.”

The draw for the 12 lock ins was held immediately following the A main tonight. The 12 locked in drivers will start the main event tomorrow in the following line up.

The remainder of the field will be filled with the eliminating races starting with the K main tomorrow at 1230 CST. The main event will be a 50 lap event with a field made up of the very best of the best. It is an event that people have traveled from all over the country to see and have followed over radio broadcasts from all over the world. CBS announced that it will televise the event on April 14th.

Other news Winged Sprint Car driver of the year was announced tonight and Jason Meyers took the honors. As well as the USAC series announced it will be returning to West Memphis on their national tour. It is the first time back to Memphis area for the sprint cars since 2004. The date for the event is Sept. 8th.

The alphabet soup day for the Chili Bowl begins at 12:30 PM CST tomorrow with the running of the first K main. There will be 2 all the way up to the B main and the event will finish up with the main event for the Golden Driller at approximately 10 PM CST. It is possible to climb into the A main from the K main. It’s not an easy run and you would have to finish in the top 3 of every race to get there. But it is possible so if your favorite did not make the top 12, don’t give up. The Chili Bowl is far from over.