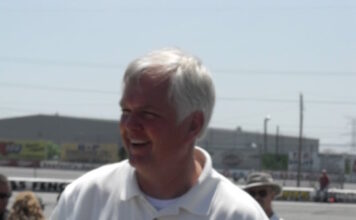 [/media-credit]As the ARCA Racing Series enters its 60th year of competition, the history books get re-opened to view how the series has grown. Through the last 20 years, one of the drivers that has stood out is Frank Kimmel.

Beyond the goal of winning the championship, Kimmel is also focused on another record – most all-time career victories in the series. Currently, Iggy Katona holds the record with 79. Kimmel, meanwhile, currently has 74 wins going into the 2012 season.

“Every year I get asked what’s important to me to achieve for the season,” Kimmel, who finished third in points last season, says. “Winning Daytona is first on the list for me, and it’s important for my entire family. Being the first race for ThorSport Racing, everyone’s working really hard to achieve some wins – period. Daytona would be great and such an accomplishment, but we all know what can happen there. I can honestly remember racing for two years without ever winning at all, and that’s why it means a lot to have 74 wins under my belt now. The first time at Toledo was such a big thing for us. I have a lot to prove this year to win again, since it has been three years since I’ve been to Victory Lane. Iggy Katona is a huge hero of mine; he raced against my dad for years. He’s the man. It’s a privilege to be in the same class of driver as such an ARCA Racing legend as Iggy.”

Beyond just the win record, Kimmel is also closing in on the most career poles award. Katona currently holds that with 43, while Kimmel has 42. One of Kimmel’s sponsors, Ansell, will be giving out the trophies this year, along with Menards.

Throughout his career, Kimmel has 233 top-five finishes and 300 top-10 finishes, but also beyond the statistics, could say a lot about ARCA’s history.

“Getting the first win is the most amazing achievement,” he says. “I raced many years with Terry Shirley in the 02 car, and we only won one. When Terry left to be a crew chief, I didn’t have a team to drive for at all. I thought I’d be driving late models. Then I was picked up by Dan Faldorf and got with Larry Clement. We ended up putting a hodge-podge of races together by the skin of our teeth, and with blood, sweat, and tears, we ended up fifth in driver points and didn’t even go to every race. When we came back the next year and ran full-time for Larry, being manager, driver, and everything, we were second in the points, so we kept climbing. Then the following year, in 1998, we won our first championship. It just goes to show that the competition is always so fierce, it takes a lot to get there and it means so much. Every one of my nine championship trophies have people and a great story behind them. In my tenure of ARCA Racing Series driving, every year is a great battle. It’s going to be a lot of fun competition in 2012.”